Kathy Griffin: CBS Told Me They Were ‘Not Considering Females’ for Late Night Slot (UPDATED) 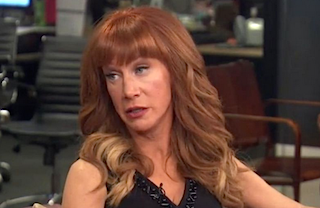 When Craig Ferguson announced he was stepping down from the Late Late Show on CBS at the end of this year, there was a lot of speculation surrounding the possibility that America could get its first female network late night host since Joan Rivers briefly hosted her own show on Fox nearly 30 years ago.

One of the many names being thrown around, along with Chelsea Handler, Aisha Tyler and more was comedian Kathy Griffin. But then, this week, CBS chose yet another white man to take the gig: the relative unknown (in America at least) British actor James Corden.

In a new interview with the Associated Press, Griffin revealed that she expressed interest in the Late Late Show position, but was rebuffed by an executive who told her, “They’re not considering females at this time.”

She said her response was, “You realize that’s illegal to say in a business meeting?”

“I walk into the (meeting) room thinking, ‘I’ll give it a shot.’ I leave the room thinking, ‘I never had a chance,'” Griffin told the AP, adding, “We could be looking at 40 or 50 years until a woman is hosting a network late-night talker.”

In a podcast interview with comedian Marc Maron that was also released this week, Griffin recounted the same story. “I’ve literally heard the phrases in the last month, A, ‘We’re not considering any females for that position,’ and B, ‘You’re not part of the conversation.'”

“I’m so used to hearing the ‘chick’ thing, or ‘you’re not part of the conversation,'” she said, “that I just have to figure out a way to insert myself into the conversation.”

Listen to audio below, via WTF Podcast:

And listen to Maron’s full conversation with Griffin at wtfpod.com.

Update — Sept. 14, 1:35 p.m. ET: A CBS spokesperson reached out to Mediaite with the following statement, denying that anyone from CBS had told Griffin they were “not considering females” for the Late Late Show position:

“CBS never said that to Kathy Griffin; never met with her, and in fact, we did meet with several female candidates.”