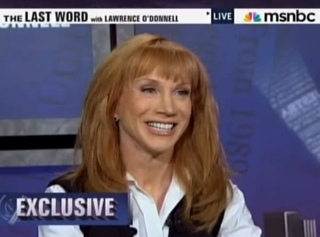 Kathy Griffin is really keeping to her New Year’s resolution to “take down” 16-year-old Willow Palin— or at least to annoy her mom. Griffin visited Lawrence O’Donnell tonight to respond to Sarah Palin calling her a “has-been comedian” and a “bully,” among other things. Griffin, of course, is thrilled– the Palin feud caused her show to sell out so fast she had to schedule an extra two nights of performing.

The “thank you” to Palin for that great news only came after a barrage typical for Griffin, though also poignant in pointing out that true bullying– particularly in the LGBT community, is no joke. “If you don’t know the difference between a joke and bullying… are you going to call the ghost of Johnny Carson a bully?” she asked. “Are you going to call the entire cast of SNL bullies?” Contrast her words, Griffin explained, to the use of homophobic slurs by the younger Palin. “When you’re 16, you know you’re not supposed to use that word,” Griffin noted (Palin had used a homophobic epithet on her Facebook page).

Not all was sincere concern for the LGBT community, however. At one point, Griffin asks, upon being reminded of Palin’s “has-been comedian” slur, whether Palin is still the governor. “She’s calling me a has-been comedian, but she’s a has-been governor.” O’Donnell quickly jumped at the obvious joke: “Have you ever quit halfway through a show?” The pair also took some time to mock apparent presidential candidate Newt Gingrich and, of course, promote Griffin’s new Broadway show.