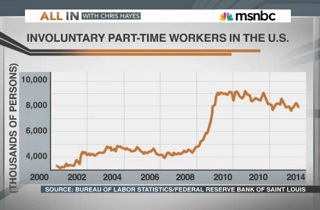 On Friday night’s Real Time, The Daily Beast‘s David Frum put up a rapid-fire barrage of health care flack so thick, liberal panelist and All In host Chris Hayes could hardly keep up. Luckily, Hayes has his own show, so while he didn’t have the data he needed to refute Frum on Real Time in real time, he took a few minutes Monday night to set the record straight on one of many false, illogical, and just plain stupid claims made at Bill Maher‘s table.

The claim that Hayes challenged last night is actually one which he managed to push back on during Real Time, but this time, he brought along a chart. On Real Time, Frum claimed that Obamacare “is about to have a very likely devastating impact on American employment,” because “if your workers work less than 30 hours, you’re exempted, and we have seen, that’s where the growth in the labor market is.”

At the time, Hayes pointed out that the trend toward part-time employment began before Obamacare, and last night, he went into greater detail. “I wanted to circle back to that point to emphasize the point with actual data, which I didn’t have access to while at Bill Maher’s table,” Hayes said.

“Look at this chart. I wish I could have drawn this chart in that moment,” he lamented, adding that “There was indeed a huge spike in part-time work, but it came with the great recession in 2008 and the financial crisis. Since then, involuntary part-time employment, that is, workers who would like to work full-time jobs but are stuck in part-time jobs, has trended downward.”

The only thing I would add to that is a fact that never seems to get mentioned in the face of emo-business whining about cutting employees’ hours because of Obamacare, and that is that most low-wage businesses already offer benefits to their full-time employees, and so they already have an incentive to cut costs by screwing over their employees, while still marketing themselves as competitive employers. Blaming this on Obamacare is just a bonus, like Hannibal Lecter blaming his cannibalism on a lousy pizza someone delivered him.

Apparently, the closer Obamacare gets to implementation, the more desperate Republican spin gets, because Frum (who has been reasonable on issues like gun control) got downright creative Friday night, and unfortunately, host Bill Maher decided to move things along before any of that crazy talk could be responded to:

Let’s just take these one at a time:

“I’m in favor of universal coverage, and I’m in favor of reform, but you do not do this in one gigantic leap, this is exactly how you make terrible, terrible mistakes.”

This is actually a popular tactic among conservatives. Hey, man, I want what you want, I just want to give lobbyists a chance to kill it! The problem with health care, as I’m sure Frum knows, is that each reform you make is dependent on another reform. You couldn’t eliminate preexisting conditions clauses, for example, without also enacting a universal enrollment provision, like single payer or the individual mandate. Insurance companies would almost instantly go out of business.

Frum also deploys the other reasonable guy “Hey, bro, didn’t you know I was a secret Marxist all along?” tactic of criticizing Obamacare for not being what conservatives constantly accuse it of being: a government-run health care system. Frum says he supports universal coverage, but dumps on the individual mandate, which leaves single payer as the only other way to deliver it.

“The people who should have the mission (of cost control) are insurance companies.”

That’s a bit like saying “Putting out fires should be the job of oily rags and exposed wiring.” I’m sure they’re good for something, but insurance companies have had their crack at this, and man, that sucker is still blazing.

“Single-payer systems around the world are very good at is controlling costs by denying care,” and “Governments are better at saying no than private insurance companies.”

Frum probably has a table of stats somewhere to torture this statement into submission, but it’s not really operative in the United States, where private insurance companies generally base their medical necessity and coverage guidelines on government standards. Call your insurance company and ask them: if the government says you don’t need a vaccine, is your plan going to cover it? While cutting costs is an incentive that private insurers share with government programs like Medicare, only one of these two also has a profit motive to deny care.

“If you’re poor in America, you have to face this fact: Medicine is the least important part of health. The reason American poor people do so badly is failures of what you might call public health, problems in accidents, problems in food access, but Americans are going to ask the health care system to do things that a health care system cannot do, they cannot deliver health, they can only fight disease.”

It’s hard to decide where to bite into this enchilada of derp, but let’s start with this: Where, exactly, does Frum recommend all of these poor people go after they have one of their many accidents, if not to a doctor? It’s unclear what Frum means by “problems with food access,” but doctors have been known to ask a thing or two about their patients’ diets. Neither condition is improved by not being able to see a doctor. Finally, there actually are many ways in which our health care system does more than just fight disease. Frum is probably trying to express something along the lines that people who can afford to eat a healthy diet are better off than those who can’t, but again, nobody is better off without being able to see a doctor.

Frum also describes the enrollment of young people in Obamacare as a “sacrifice” that they’re being asked to make. That’s not the conservative view, or the view that any reasonable person would take, toward purchasing health insurance. These are the people that conservatives used to call “free-riders,” and for whom The Heritage Foundation invented Obamacare. You get insurance when you’re healthy, and other healthy people’s insurance premiums pay for you when you get sick. This is how insurance works, and the reason insurance companies won’t cover preexisting conditions.

On an unrelated point, Chris Hayes drew attention from conservatives by endorsing the tactic of using a continuing budget resolution to achieve a policy goal, provided it was important enough. Hayes said that “if there was a liberal caucus in the United States government that could, you know, hold the continuing resolution hostage to try to stop a war that I thought was horrible, I would say, yeah, do it. The thing they’re trying to stop here is 30 million people getting health insurance! Like, that’s the substance here!”

I asked Hayes to clarify if his endorsement of the tactic extended to the threat of a default, via a failure to raise the debt ceiling. Here’s his response:

(N)o. I don’t think you should threaten a default to obtain policy ends. And I think the debt ceiling itself should be eliminated as Gephardt did in the late 1980s I believe.