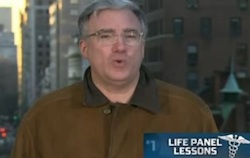 On last night’s Countdown, Keith Olbermann made a special appearance to update his viewers on his father’s medical condition, and to respond to critics of his “Life Panels” Special Comment from last week, singling out Rush Limbaugh and Glenn Beck. As is often the case, much of the criticism has been focused on how the message was delivered, rather than the substance of it. Keith gave his critics more credit than they deserved, and took on what little substance they offered.

In case you missed it, here is Olbermann’s response:

First of all, Olbermann very generously assumes that Glenn Beck’s well-wishes are sincere, despite Beck’s subsequent mockery of Keith’s wrenchingly personal description of his father’s ordeal. I’m sure this is the “compassion” and “respect” to which Glenn referred when he was oversharing his own medical issues. Gee, Glenn, don’t you hate it when people share their own personal tragedies just to make a point about health care?

Even so, I could see validity in the criticism if Keith had sought to paint all conservatives as evil here, but he was very specific, and persuasive, as to whom he was demonizing: the very deserving people who created the “Death Panel” myth, not those who were hoodwinked by it. By using his father’s situation to illustrate an important truth that has been lost in our healthcare debate, Keith Olbermann sought only to bring meaning to his father’s suffering, just as Glenn Beck had done himself.

That brings us to the substance of Beck’s criticism, such as it is. Beck is, indeed wrong. The Sarah Palin Facebook entry that started the “Death Panel” myth, which (abetted by a lazy media) completely derailed the national debate on healthcare reform, was a reference to a provision that was included in the bill at that time, Section 1233, which does exactly what Keith says it does.

Beck is referring to statements Palin made after she was universally derided into a lame, fact-challenged walkback that was, ironically, made possible in part by frequent Olbermann contributor Eugene Robinson.

Finally, there already are death panels, ones run by private insurance companies whose primary motivation is profit. There is rationing now, only for tens of millions of Americans, the ration is zero, and the determining factor, again, is insurance company profits.

Going public with his father’s story was certainly a risk, one which required a certain amount of courage on Olbermann’s part. If only his critics had the courage to take this argument head-on, armed with facts, not “Death Panel” fantasies.