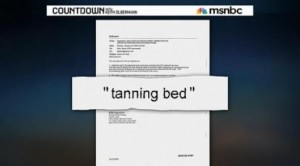 There’s a neat symmetry to the fact that, the day after Keith Olbermann responded to gleeful rumors of his own demise, he posits the end of the line for Sarah Palin. Emboldened by the release of thousands of Palin emails, the inauspiciously racist kickoff to the Palin-headlined “Tea Party Convention,” and Palin’s truckling response to Rush Limbaugh’s cowardly “retard” litany, Keith asks if the countdown is on to the end of Palin’s political career.

First, Keith goes through descriptions of some of the emails that MSNBC obtained, including this one about the tanning bed. Don’t take his word for it, though. You can search through the emails yourself, and evaluate Olbermann’s characterizations for yourself.

On the tanning bed, for instance, the actual email is both less damning and more embarrassing than Keith lets on. Palin’s request that the tanning bed arrangements be kept close to the vest makes sense, given the attention paid to such expenditures in the past. There doesn’t appear to be anything fraudulent about the request, but rather, a desire to avoid unnecessary embarrassment.

Her instinct proves correct, as Palin’s attention to the tanning bed, and Todd’s assistant exclaiming “On a day like today-I wish the bed was ready to go for you to use right away!!”, don’t serve Palin’s cultivated image as a down-to-earth friend of “Joe Sixpack” and serious political mind. On the other hand, not many of us could likely survive an outing of our inboxes with dignity intact.

Potentially more damaging is Palin’s association with the now-toxic Tea Party convention. She’s scheduled to speak today, and anything less than a full-throated denunciation of Tom Tancredo‘s nostalgia for literacy tests will seriously hurt her with all but the most dedicated Palinistas. If Palin has any true friends, they will tell her to skip this event.

Worst of all, in my opinion, is Rush Limbaugh’s description of his interaction with Palin’s chief spokesperson, Meg Stapleton:

The scene that Limbaugh describes is revolting enough to disappoint even the most jaded Palin critic, let alone a supporter. Her failure to call Limbaugh out for directly insulting “all of God’s children” was a damaging sin of omission, but one which supporters could rationalize as a matter of pragmatism.

This supplicating phone call to the “retard”-bandying poobah, though, is not only humiliating, it reveals the inauthenticity of Palin’s outrage, and settles the question of whether she is trading on her child’s disability. As a human being, I fervently hope Limbaugh is lying about this, as this betrayal is at least as heartbreaking, to individuals and families dealing with disabilities, as the insult that started it all.

Does this mean Palin is finished? Probably not. The lines have long been drawn on public opinion of Palin, and this is not likely to change much. Palin is fortunate to belong to a political movement whose die-hard base seems willing to  forgive anything. I imagined, for a moment, what would happen had Palin delivered Tancredo’s speech, and I could already hear the rationalizations. Palin could waterboard kittens, and the Palinistas would explain that Mittens and Fluffy know stuff!

This is the kind of blinkered worship that the right often accuses Obama supporters of, but Olbermann himself punctured that notion not long ago. Palinistas have remarkably long fuses.