Kirsten Powers On Benghazi: ‘Someone Should Ask Obama To Define The Word Transparency’ 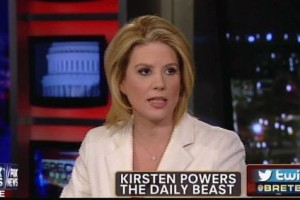 Baier aired a clip of Fox News’s James Cutter’s interview with newly-minted Secretary of State John Kerry, conducted earlier in the day. Rosen asked, “Why have we not heard from any of the Benghazi survivors?,” to which Kerry responded, “I can’t tell you the answer to that. I can tell that I have I visited with one of the survivors at Bethesda Hospital who is a remarkably courageous person, who is doing very, very well.” When Rosen interjected to ask “will we hear from them?”, Kerry responded: “I don’t know what the circumstances are of any requests to talk to them or not.”

Baier also confirmed that, this week, the Capitol Hill committees received the requested transcripts of the discussions with the Benghazi compound’s guards.

Kirsten Powers’ reaction? “Someone needs to ask the President to define the word transparency because I think he has a different understanding of it than other people.” Powers noted that Kerry’s lack of curiosity is “kind of remarkable,” adding, “There should be more oversight in this situation. Congress should have the names of these people. They should’ve had the names of these people when this happened… What better way to know what happened than to speak to someone who was there?”

Tucker Carlson agreed, noting the reported dozens of U.S. personnel injured in Benghazi from whom the public will undoubtedly hear. “Everything is revealed in the end, sooner rather than later, certainly in this age.… Eyewitnesses will be telling that story…. They [the White House] seem to imagine that the details can be kept from the public indefinitely and that is just not the case.”

Charles Krauthammer, while agreeing with Powers and Carlson, did offer one possible reason for the lack of transparency regarding the Benghazi witnesses:

“It is likely that a large number of these are CIA, undercover — you don’t want them out there and you have to protect secrets and identities… But it’s likely that there are at least a few who are not and hiding their identities, I think, is absurd.”