Kirsten Powers On Hannity Panel: Left’s Refusal To Call Out Bill Maher For Misogyny Is ‘Disgusting’ 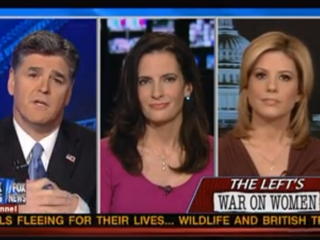 As the Sandra Fluke controversy flounders along as one narrative along the greater opposition to needlessly offensive comments in the media against women, Sean Hannity updated his audience today on the reactions of liberal women to attacks by Bill Maher in contrast to the response to Limbaugh. It was surprisingly silent compared to the previous outcry, a reaction Kirsten Powers called “disgusting.”

Powers appeared with Hannity and Kate Obenshain, who agreed that the double standard was clear. Powers noted that many on the left are “happy to talk about Rush Limbaugh but they will not talk about Bill Maher,” which she found outrageous because the correct comment seemed so easy: “it’s very simple to say ‘of course you can’t call somebody the c word.'”

Hannity tried to expand the scope of the conversation by attacking “liberal hate speech” in general, and replaying a big chunk of Ed Schultz now-famous tirade against Laura Ingraham. He decried the sanctimony of NBC News and Tom Brokaw when such people work at the corporation, though Powers objected that what Schultz says on his radio show “isn’t Tom Brokaw’s fault.”

Obenshain argued that the reason for the sanctimony had something to do with the demographic the left seemed to attack: conservative women. She argued it was a particularly sensitive cause for conservative women because “liberals have taken the woman vote for granted for so long. Powers disagreed, however, citing the media treated of Hillary Clinton, particularly at the hands of Chris Matthews, as proof that both sides get attacked. To Powers, the problem arose with “women who step out of line,” regardless of ideology. Obenshain thought the public outcry during the Clinton campaign was enough to prove this incorrect despite the comments, however.