KISS’ Gene Simmons Wants His Vote For Obama Back: ‘I Fell Victim To The Charm’ 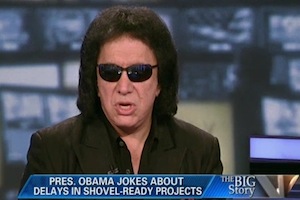 Gene Simmons is most famous for sticking out his tongue while singing in the band KISS, but now he’s sticking out his tongue at President Obama too. Simmons appeared on Varney & Co. this morning and told Stuart Varney that he is embarrassed by the fact that he voted for Obama in 2008. Coming from a man who usually wears make-up in public, that’s certainly saying a lot.

Simmons explained that he was hopeful Obama would surround himself with business leaders and not professors:

“I want my vote back. This is a good man . . . but I don’t think the man is qualified to understand the structure and what business needs, which is to be well-informed. . . . Our President had two years of local experience, was born in Hawaii and never ran a business in his life.”

Simmons first lost faith in Obama a few weeks ago when he made the controversial comments regarding Israel’s borders. Simmons has strong ties to Israel and called Obama’s recommendation to Israel the “height of lunacy.” Given that Simmons so passionately opposes Obama now, Varney was a bit perplexed as to why Simmons voted for Obama at all. The KISS icon admitted, “I fell victim to the charm and I wanted to be a part of that moment in history and I’m ashamed to say I didn’t look at the resume long enough.”

With Simmons jumping ship, Obama might want to take efforts to shore up the aging musician wing of his celebrity base of support before anyone else bolts!