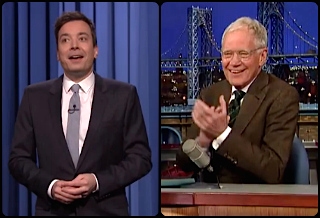 After a taking the third week of March off, the Late Show with David Letterman returned last week to retake its spot at #2 in total viewers, ahead of Jimmy Kimmel Live!, 2.856M to 2.694M. However, David Letterman’s 0.53 rating in the 18-49 demo still trailed Jimmy Kimmel’s 0.65.

And, since today’s late night viewers are not only watching on TV, here’s a look at the most popular video for each of the three shows last week on YouTube (as of Thursday, April 3rd):

With Fallon’s ratings refusing to budge, the battle for second place is getting more interesting by the week. By regaining his lead in total viewers over Kimmel, Letterman has so far prevented himself from falling to third place across the board. And with a renewed effort this week to embrace social media, he’s clearly gunning for Kimmel’s younger viewers as well.