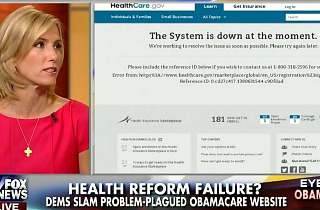 Conservative radio host Laura Ingraham appeared on Fox & Friends on Wednesday morning where she told Conservatives who might be concerned that the Republican Party has suffered a defeat by forcing a government shutdown that they should not “lose hope.” She said that the shutdown will be a distant memory by the 2014 midterm elections, but the onerous provisions in the Affordable care Act will continue to be a vivid concern for voters.

Ingraham began by saying it’s a matter of time before Republicans in Congress give up the fight over the ACA which led to the shutdown. She added that she thinks the “countdown to cave in” begins again after the shutdown as the president plans a renewed push for immigration reform.

“This is what happens when you rush out your chin first and you don’t really have the manpower and the numbers and the votes to push your goal through,” Ingraham said.

Steve Doocy transitioned into a series of sound bites from Democrats panning the roll-out of the ACA.

“Long after this process on Capitol Hill concludes, this will be with us,” Ingraham said of the ACA. “So at the moment, I tell conservatives, ‘Don’t lose hope’ or ‘Don’t get morose, that it’s over.’ This anvil is still squarely on the shoulders of the American people.”

“I’m telling you, this – Obamacare – is still going to still be a real problem for the Democrats who vociferously defend it,” she concluded.