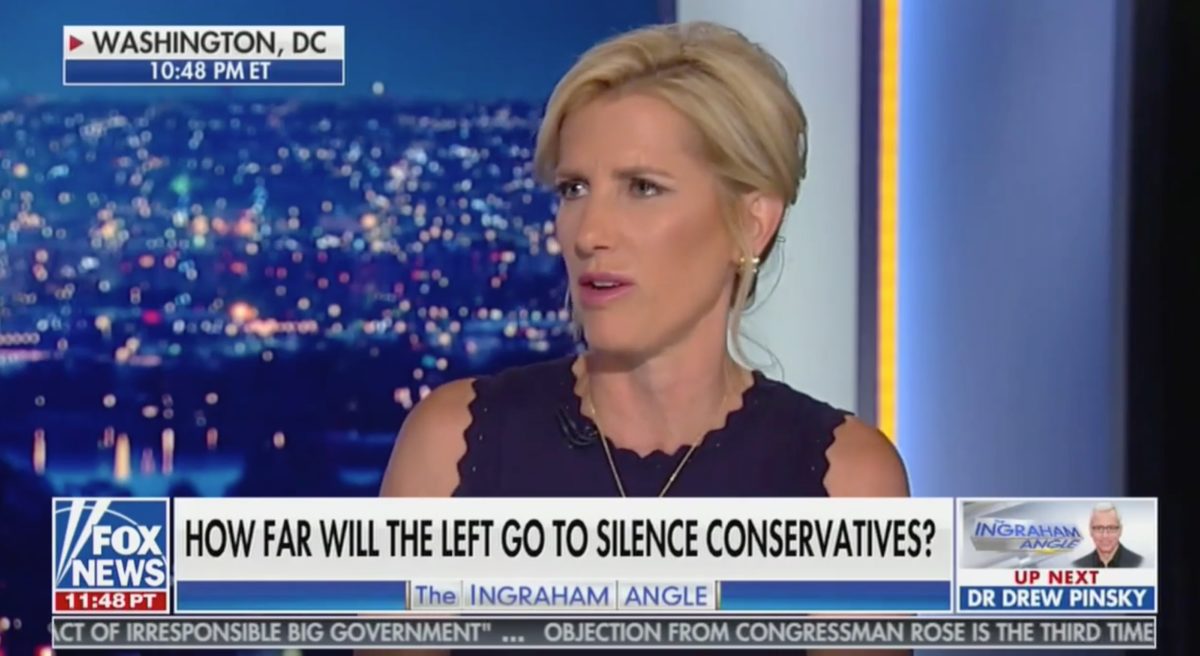 Critics are not impressed with how Laura Ingraham is accusing other people of elevating racists and anti-semites… right after she did exactly that.

The Fox News host is getting a lot of flak from a segment of Thursday show in which she bemoaned how “prominent voices” like Paul Nehlen are being censored on social media. As CNN’s Jake Tapper and others have pointed out, Nehlen is a blatant anti-semite, racist and white supremacist.

On Friday, Ingraham sent out this tweet accusing CNN of making bigots “very happy” by posting examples of the garbage Nehlen has posted in the past.

Retweeting screenshots of despicable old tweets by racists and/or anti-semites must make those racists & anti-semites very happy. Unfortunately it does zero to elevate the debate in America. cc. @CNN

Ingraham’s tweet completely ignores the fact that she just defended a racist anti-semite on primetime cable television, and the Twitterverse was only too happy to ridicule her and point out the flaws in her logic:

If you think Paul Nehlen is a racist antisemite and his old tweets are despicable … why did you defend him on your show? https://t.co/USMZBjbGvt

Does it make them as happy as you calling them “prominent voices” who should be allowed back on Twitter?

.@IngrahamAngle was bothered by a private company silencing some voices, but not other voices. Why? pic.twitter.com/BUeMvRHPLu

How about defending them as “silenced conservatives” on a primetime show watched by millions, what does that do to the debate

Except for the fact, Laura, that the old tweets of the racist you defended is exactly how he feels TODAY. https://t.co/SzQu5Qd2xB

.@IngrahamAngle, Paul Nehlen is not being censored because he’s a conservative. He was kicked off social media for repeatedly spewing anti-Semitism & racism, and for targeting Jewish journalists. Do better, @FoxNews. https://t.co/loLhQ9F6Oh

Laura Ingraham literally held up a white supremacist on her show last night as an example of a “prominent” conservative voice “censored” by social media https://t.co/Ou2VeGI7bQ

Please do not tweet critically about prominent racists, it makes them happy. Instead, do what makes them really angry: Mention them on your primetime cable show as the victims of censorship. https://t.co/aCj6sd0STa