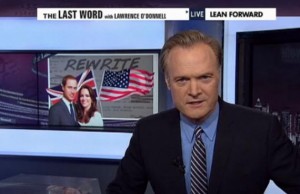 MSNBC’s Lawrence O’Donnell used his “Rewrite” segment Friday night to decry the US news media’s obsession with the impending British Royal Wedding of Prince William to Kate Middleton. The segment quickly devolved from a critique of media frivolity, into my Uncle Pat going into a rant about “the troubles” in the middle of Christmas dinner.

We get it, the Royal Wedding is not the life-and-death news story that Libya, Fukushima, or Charnald TrumpSheen are, and as Jerry Seinfeld noted, the British monarchy is an arcane symbol of debatable value. These are all things that most British people already know, but don’t necessarily want to hear from a cackling outsider whose last President thought “the royal we” was the British equivalent of “if it’s yellow, let it mellow.”

But O’Donnell takes the occasion of this feather-light story to blast the British Empire as the bloodiest “regime still standing,” and the Royals as a “bloody stain” at worst, and “a joke” at best. Maybe O’Donnell is hoping that Kate and William will get a load of his way-harsh commentary before the blessed day, and just stay in bed crying and hugging the Crown Jewels.

O’Donnell’s over-the-top screed notwithstanding, his basic premise suffers from that old biblical adage “Let he who has not covered bullshit cast the first stone.”

Give O’Donnell props for patriotism, though, whose raw nerves over the American Revolution rival those of Peter Brady‘s Benedict Arnold-hating classmates. Don’t even get him f**king started on the War of 1812.