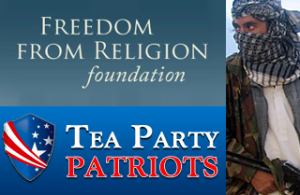 The American Family Association’s Bryan Fischer used his “Focal Point” radio broadcast this week to draw an unlikely analogy between “secular fundamentalists” in America and the Taliban.

Fischer held up the Freedom From Religion Foundation and the ACLU as specific groups that he believes embody the spirit of the Islamic fundamentalist movement.

This isn’t the first time the term “American Taliban” has been bandied about for controversial effect. Most notably, Aaron Sorkin employed the term, through his fictional news anchor Will McAvoy on the HBO drama The Newsroom.

In a famous scene from the season one finale, McAvoy, played by Jeff Daniels, goes on an epic rant against the Tea Party, outlining what he sees as the many similarities between that group and the Taliban.

While the fictional McAvoy uses the “American Taliban” comparison to draw attention to what he sees as a hijacking of the Republican Party by a group that wants to take it in a regressive direction, the real Fischer is using it to equate non-believers with a group that will literally martyr themselves and kill others for their religion.

What both men appear to prove is that there are better analogies out there and the Taliban are probably better left in Afghanistan.