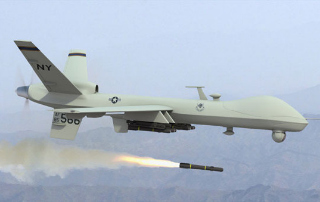 In a letter from Eric Holder to Sen. Paul this afternoon, the attorney general said that the president could use lethal force against American citizens on U.S. soil in “an extraordinary circumstance,” one that resembles something like the “catastrophic” domestic attacks of Sept. 11, 2001, and Pearl Harbor.

While threatening to hold up the confirmation of Obama’s CIA director pick John Brennan, Paul demanded answers from the administration on whether they would extend their legal rationale for targeted assassinations of American citizens abroad to allow them to take out American citizens here at home. During one Fox appearance, the libertarian-leaning Republican senator put forth a hypothetical situation where an American could be evaporated by a drone strike while “drinking at a café in New York or Boston.”

On Tuesday, CIA director nominee Brennan told Paul that “the agency I have been nominated to lead does not conduct lethal operations inside the United States — nor does it have any authority to do so.” Attorney General Holder followed up with a letter that said lethal force against American citizens on U.S. soil is “entirely hypothetical” and constitutes “an extraordinary situation” “we hope no president will ever have to confront.” Holder cited 9/11 and Pearl Harbor as examples of such domestic attacks that may warrant the executive branch to authorize an attack on American citizens on U.S. soil; but, of course, he cautioned that such a circumstance is “unlikely.” (But it could potentially exist.)

A portion of the letter below, as partially reprinted by Mother Jones (full letter here):

As members of this administration have previously indicated, the US government has not carried out drone strikes in the United States and has no intention of doing so. As a policy matter moreover, we reject the use of military force where well-established law enforcement authorities in this country provide the best means for incapacitating a terrorist threat. We have a long history of using the criminal justice system to incapacitate individuals located in our country who pose a threat to the United States and its interests abroad. Hundreds of individuals have been arrested and convicted of terrorism-related offenses in our federal courts.

The question you have posed is therefore entirely hypothetical, unlikely to occur, and one we hope no president will ever have to confront. It is possible, I suppose, to imagine an extraordinary circumstance in which it would be necessary and appropriate under the Constitution and applicable laws of the United States for the President to authorize the military to use lethal force within the territory of the United States. For example, the president could conceivably have no choice but to authorize the military to use such force if necessary to protect the homeland in the circumstances like a catastrophic attack like the ones suffered on December 7, 1941, and September 11, 2001.