Like Reagan and Trump Before Him, Repetitive Rubio Showing That Debates Really Do Matter
Opinion

Like Reagan and Trump Before Him, Repetitive Rubio Showing That Debates Really Do Matter 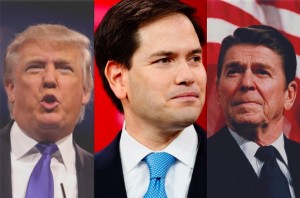 By now you’ve seen the headlines and witnessed the mockery online around this narrative dominating cable news today: Marco Rubio is scripted. He’s a robot missing the biggest attribute of this campaign season if Bernie and Donald are any indication: authenticity.

Chris Christie exposed said flaw Saturday night after Rubio repeated the same line on four different occasions during a debate seen by 13.2 million people live on ABC and millions more caught clips of during the Sunday morning talk shows. Even today Rubio’s performance was a hot topic, with MSNBC’s Morning Joe going so far to kick off the program comparing Rubio to the Fembots in Austin Powers, complete with movie clips.

So as we enter arguably the most crucial primary of them all in New Hampshire — the one that catapulted the likes of Reagan and Clinton to their presidencies after appearing to be down and out — Marco now has a branding problem. Know this: These sticky things are very difficult to overcome if they extend outside the media bubble and into the subconscious of the average voter who doesn’t follow this stuff 24-7. It happened to Howard Dean after the scream heard round the world. It happened with Mitt Romney after the 47 percent comment was revealed. It started in 2015 with Hillary around her perpetual propensity to tell invalid truths on a variety of topics. Branding in politics — particularly when done by a competitor (in this case, Christie) is never a good thing. And for Rubio, who performed exceptionally well during six GOP debates going into Saturday, this caricature couldn’t have come at a worse time.

But before piling on, here’s something to consider: Every candidate in this race is repetitive. Everyone falls back on the same lines over and over again. This is especially true for Donald Trump, who will state the same five things in every speech and interview he does (paraphrasing from memory):

On trade, we’re getting killed by Chy-na, by Mexico.

We have incompetent people — politicians — making bad deals. My whole life is about making good deals. I’ll bring our jobs back from Chy-na. From Mexico.

Every online poll has me winning every debate.

When I’m president, we’re going to be winning so much people are going to get sick of it.

Now, some may construe calling out Trump for driving the same points home as a negative. It’s actually not and here’s why: The media — especially political media — lives in a bubble. Every day for the past ten months have meant 12-18 hours of following the races for the nomination. And with that comes exposure to what sounds like the same politicians spouting the same talking points on the stump and in interviews.

Trump stands out, however, because he mixes in ready-for-viral soundbites — usually an attack on somebody — that almost always carry into next news cycle(s). But his overall message every time still remains the same: The country is in bad shape, here’s a few easy-to-absorb reasons why (bad trade deals, weak immigration policy, diminished military and special interest control of Washington) and only I can make it great again (I’m a world-class negotiator/job creator who doesn’t take BS from anyone and isn’t beholden to big money). Forget deep-dives into policy, Trump says for now… just remember these simple takeaways and make your decision from there. In retrospect, the problem for Trump in Iowa was — by his own admission now — missing the Fox News debate just days before votes were case in Iowa. By leaving himself off that stage, he doesn’t get to make those points to a large audience again while allowing himself to be defined by others.

Arguably one of the best examples you’ll see of narrowing a campaign theme down to a few bullet points was the one conducted by Joe Biden in 2012. The message that crowds were practically singing back to him as the campaign wore on? “GM is alive and Osama Bin Laden is dead.” The vice president declared this in every speech. Easy to compute, pithy and crowds and news producers loved it: We saved the good guys at home and killed the big bad guy the other administration couldn’t. From this perspective, it’s almost a shame we won’t get to see a Trump-Biden matchup based on the refreshing rawness each brings to the table. It really would have been fun… (and who knows, maybe there’s a still a shot we will).

Relatively still unknown to a solid majority of voters, Rubio continues to attempt to brand himself instead of allowing others like Christie do it for him. Articulating positions in a 140-character, 12-second-soundbite world are essential to accomplishing that in 2016. But to use the same line “this fiction that Barack Obama doesn’t know what he’s doing” isn’t a message and it isn’t a takeaway. It’s a default. And it’s one that can be made into a different kind of 12-second bite: The kind of mortifying montages producers absolutely love to feature on any political show… because it not only makes a point, but does so in a bitingly- funny way. Fast-food substance and entertainment: it’s the bread and butter of cable news.

But will Rubio’s performance actually hurt him in taking the next step in his 3-2-1 strategy (3rd place finish in Iowa, 2nd place in New Hampshire, 1st in South Carolina)? Perhaps an example going back 36 years can provide a glimpse. At the time, Ronald Reagan — via his internal polling — trailed George H.W. Bush by 21 points in New Hampshire after a stunning defeat in Iowa in the race for the GOP nomination.

Note: Reagan’s campaign team was extremely confident before the race began that its candidate would breeze to the nomination and therefore tried to shield him as much as possible from debating (now referred to as the Wasserman-Schultz strategy). But desperate times called for desperate measures. And even after the Nashua Telegraph stepped forward to sponsor a one-on-one debate between Bush and Reagan, the Federal Election Commission refused to pay for it, citing a need to add other candidates still in the race (Bob Dole, John Anderson, John Connally, etc.). Knowing it was facing defeat, the Reagan team agreed to pay for the whole thing. The debate was held in a high school gymnasium.

Some of you know the rest from there: Reagan won it going away, stealing the big moment of the night when the moderator tried to cut him off from making an opening statement by responding, “I am paying for this microphone, Mr. Green!” His last name was actually “Bream”, but whatever… Reagan went on to win the Granite State by a whopping 50-23 margin. Remember, this was before cable news, so the only clip most New Hampshire voters saw of Reagan three days before the primary was that “paying for this” soundbite followed by a pan over to Bush, who — with his huge glasses — looked as befuddled and stunned as Cam Newton yesterday.

Debates oftentimes come down to one moment. In 1980, three days before a likely defeat that would end his campaign, Ronald Reagan literally created a debate from scratch and seized his moment by branding himself as a tough guy who takes charge.

In 2016, three days before this New Hampshire primary, Marco Rubio may have experienced the opposite effect. In this chapter, Chris Christie plays the role of tough guy, while Marco gets dubiously cast as Jeb’s father circa 1980.

And in the end, Rubio not only loses the debate. He gets branded at the worst possible time.