Limbaugh on Shutdown: Media is ‘Hammering’ Republicans but We Are Still ‘Winning’
AUDIO

Limbaugh on Shutdown: Media is ‘Hammering’ Republicans but We Are Still ‘Winning’ 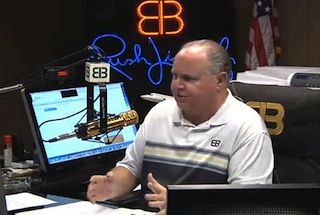 Rush Limbaugh found further proof that “the Democrats are losing” and “we are winning” when it comes to the government shutdown in the form of the hot mic moment that caught Senators Mitch McConnell (R-KY) and Rand Paul (R-KY) expressing optimism about the outcome for Republicans.

“I’m telling you, I know it’s hard for you to believe,” Limbaugh told his listeners after playing audio of the exchange. “If you just look at the media every day it’s hard to believe. You look at the media and think the Republicans are just getting hammered and hammered.” But Limbaugh was evidently heartened by the comments from McConnell and Paul, predicting that rhetoric from Democrats will backfire.

“Barack Obama was elected because he was gonna end all of this,” Limbaugh said of the stalemate in Washington. “No matter who was to blame for the bickering, Obama was a new kind of politician. Obama was gonna end it. Obama was gonna bring unity and comity and universal respect and get rid of all the old politics and bring on the new politics and everybody just gets along. Remember? And it’s gotten worse than many people can remember it ever being, given their ages.”

He did take a moment to commend whoever it was in the White House who decided to cancel Obama’s trip to Asia. “If he’d gone ahead with this trip and had been seen negotiating with those guys, the ChiComs and whoever else he was gonna meet,” Limbaugh said, “but refuses to sit down and talk to the Republicans who he’s characterizing in very disparaging terms it would not have looked good, and the optics are what these people care about.”