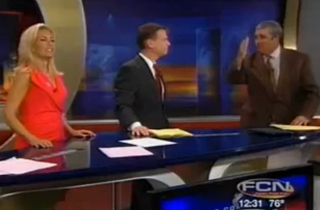 Last week, during the midnight news broadcast, a local Jacksonville NBC sports anchor let loose what seems like a playful but genuine rant against NBC network anchor Bob Costas… all because Costas’ Olympic broadcast ran longer than scheduled, pushing back the local broadcast by seven minutes.

“He did it to us again. He did it again! He does it every four years,” WLTV News 12’s sports anchor Dan Hicken began his sports report, ripping into Costas for not completing his broadcast by the designed midnight Eastern deadline. “Bob doesn’t know that 12 o’clock means 12 o’clock. It doesn’t mean 12:02, it doesn’t mean 12:04, it certainly doesn’t mean 12:07. Bob, when it’s 12 o’clock, you say goodnight!”

“You don’t care because you’re sleeping right now,” Hicken continued to rant, as he nervously shuffled the papers on the desk in front of him. “In the morning you’ll wake up with your strawberries and cream at your five-star! Bob! We’re here on the east coast working hard for you! We’re NBC family, Bob!”

Applause is heard off-camera, likely from stage crew who share Hicken’s frustration at having to stay later into the evening than expected. “You tell ’em, Dan,” one of the news anchors said, before Hicken pounded his fist to his palm and continued ranting.

Hicken might have been onto something because the following evening’s Olympic broadcast ended late again at 12:06 a.m., but then the next five nights’ broadcasts all ended at midnight or within two minutes after.

After he completed his rant and took a breath, Hicken quietly said to camera, “I love him though; he’s a great broadcaster,” and then began his actual sports recap.

Watch the rant below, via WLTV News 12: