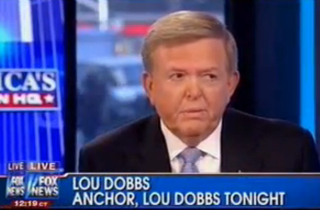 Appearing on Fox News’ America Live this afternoon, Fox Business host Lou Dobbs lambasted New Jersey Governor Chris Christie for “fawning” over President Barack Obama during his visit to the storm-ravaged state, instead of doing the best job in efficiently aiding the recovery of his state.

After playing several clips of New York and New Jersey residents yelling at politicians and television cameras over how desperately they need supplies and assistance, host Megyn Kelly noted that these angry residents’ cries represent “the danger in being too full of praise for any official in the wake of a tragedy.”

Dobbs then went on the assault against Gov. Christie for his visit with the president:

“We have an emergency situation here in this federal government is not responding,” he continued before taking aim at the president: “And we have a president who is not responding to the emergency. He is campaigning. I understand the conflict but my goodness, part of what he is required to do and part of what this Governor Chris Christie should be thanking him for, is for actually being effective. That hasn’t happened yet.”

Kelly and Dobbs then went on to characterize Christie’s behavior as “fawning” over the president, which Dobbs chalked up to a political “miscalculation” by the governor.