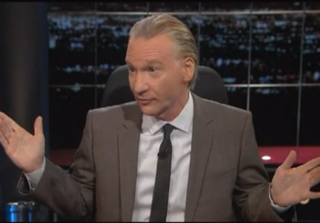 Bill Maher feels very badly for David Frum. Frum, who appeared on Real Time last night, got a handful of sympathy from Maher for being “frog-marched out to the desert” for being a moderate in his party, while Maher also debunked a certain “nostalgia,” as he called it, among liberals for Presidents George H.W. Bush and Ronald Reagan.

RELATED: Bill Maher To Panel: ‘The Problem With Racism Is Matt Drudge’

“The David Frum wing of the Republican Party… they’ve had a tough time in the last few years,” Maher noted, arguing that the party has moved so far to the right that President Reagan, who “raised taxes, was against nukes– today, that’s Dennis Kucinich.” Frum, on his end, did not think the problem was one of the political spectrum shift, but a decline in “the commitment to the institutions of the United States,” as the aforementioned presidents were, to Frum, first and foremost “institutionalists” who would not “push the country to the edge of bankruptcy” in order to make a point. Frum also praised Jeb Bush for arguing that his father and Reagan would have a hard time with this Republican Party, expecting him to one day possibly be “something better than President,” a strong moderate voice.

“I remember his father,” Maher noted, arguing that the feeling that he was a moderate when he “nominated Clarence Thomas” and had Dan Quayle for a vice president was a problem. “Dan Quayle was Sarah Palin with tits long before [they had her],” he joked, “John McCain did not invent the bimbo running mate.” Panelist Karen Finney, who had been listening quietly, then jumped in to clear the air about Jeb Bush’s courage: “Jeb Bush was brave and then, in a matter of hours, when Grover Norquist bitched, he walked it back.”