Maxine Waters: ‘I Don’t Know Who The President Was Talking To, We’re Not Complaining’
video

Maxine Waters: ‘I Don’t Know Who The President Was Talking To, We’re Not Complaining’ 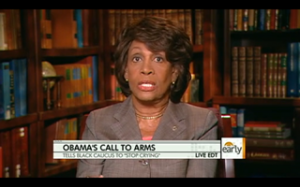 California Congresswoman and former Congressional Black Caucus chair Maxine Waters has been critical of President Obama‘s approach to unemployment, particularly within black communities where the rate is nearly double the national average, and she found it “curious” that President Obama would call on CBC members this weekend to: “Shake it off. Stop complaining. Stop grumbling. Stop crying. We are going to press on. We have work to do.”

“I don’t know who he was talking to because we’re certainly not complaining,”  she said on CBS’s Early Show this morning, also pointing out that he has not been so stern in addressing other minority groups.

“I found that language a bit curious because the president spoke to the Hispanic Caucus, and certainly they’re pushing him on immigration … he certainly didn’t tell them to stop complaining,” she elaborated. “And he would never say that to the gay and lesbian community, who really pushed him on Don’t Ask, Don’t Tell.”

“We’re working,” she insisted. “We support him, and we’re protecting that back because we want to be enthusiastic about him when that election rolls around.”

Watch the segment, courtesy of CBS, below: