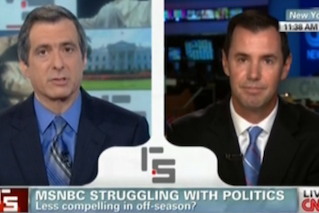 MSNBC President Phil Griffin recently made headlines by saying his network wasn’t the place for breaking news, but rather political analysis.

Concha likened this admission to Sizzler no longer offering steak: “For Griffin to say, go to the CNN cafe, go to TGIFox—if you want a natural disaster, a terrorist attack, maybe a human interest story, we really don’t do that, we’re strictly politics—that’s waving the white flag of surrender.”

Concha noted that a network taking a pass on breaking news will do poorly during heavy news cycles, like the period stretching from the Boston bombings to the Oklahoma tornados. And the scandals swirling about the Obama administration don’t help the liberal network.

“MSNBC is like the Olympics at this point,” Concha said. “You have the winter and summer Olympics, every two years. So, 2014 midterms, yes, their ratings will do better. Presidential elections, yes, their ratings will do better. Non-election years, when their president says, ‘Hey, guys, we don’t do breaking news,’ that doesn’t leave a lot of reason for me to go to MSNBC.”

Both Concha and host Howard Kurtz were skeptical that MSNBC could even pull off pet stories like the George Zimmerman trial.

“Their credibility there is shaken because you have Al Sharpton, who’s led rallies in defense of Trayvon Martin,” Concha said, adding that Lawrence O’Donnell has called it a police cover up. “They want to own that story, but I’m not sure you’re going to get an objective viewpoint, and I don’t know if viewers are going to take that the way they want them to.”

Kurtz also brought up the mounting tension between Alter and Ailes. In Alter’s new book, The Center Holds, Ailes in depicted as obscenely paranoid, going so far as to install bulletproof glass around his office for fear of homosexual militants trying to shoot at him from the street. Ailes fired back in a statement, calling all of Alter’s accusations “provably false” and suggesting he enroll at Columbia School of Journalism.

“Who you gonna believe in this situation?” Concha asked. “I gotta go with a guy who isn’t trying to sell books.”

“Jonathan Alter used to be the type of reporter that has some gravitas,” Concha said. “I don’t know why [Roger Ailes] would punch down and even acknowledge Alter in this situation…It’s only going to help Jonathan Alter sell books.”