Mediaite’s Tommy Christopher On Casey Anthony Jury: ‘Not The Media’s Job’ To Shield Them 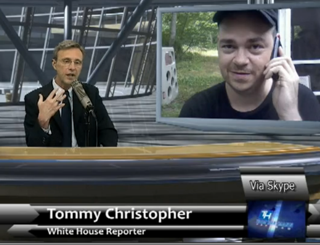 The immediate media reaction to the “not guilty” verdict presented to Casey Anthony yesterday has been one of utter disbelief– how could the jury and the media not see eye-to-eye from the same evidence? On today’s Thom Hartmann Radio Show, Mediaite’s Tommy Christopher argued the disconnect lay in what evidence was permissible in a court of law versus the court of public opinion, but that a responsible media cannot be expected to shield potential jurors from their own reporting.

The conversation between Christopher and host Thom Hartmann mostly centered around the differing perspectives that led to such shock among the American press, or as Christopher put it, the “utter apoplexy from people in reaction to this verdict.” To Hartmann, the culprit was in part a tendency to “elevate to diva status anyone with a JD,” but Christopher argued that the difference lay in the American public being “confused” as to the difference between a responsible news story and legally admissible evidence. “There are facts a journalist can present that will never make it into court,” Christopher noted, “and that doesn’t necessarily make the journalist irresponsible or wrong, it’s just a different burden.”

On this point Hartmann agreed, and gave as an example a suspect’s previous behavior. “How are you going to get an impartial jury,” he asked, when “previous behavior is widely publicized in the media?” Hartmann also suggested that a viable alternative would be a Canadian-style system where an indicted person’s identity is shielded from the media until the person is found guilty of a crime. After jokingly suggesting “a group of twelve of your Amish peers,” Christopher argued that, while, “as an armchair legal scholar,” he agreed that the press presented a problem in keeping a potential jury impartial, “as a journalist, that’s not our problem.” He did note that he wished to see more discussion in the media of how the legal rules of evidence differ from the common usage of the word, but ultimately, “it’s not our job to help lawyers pick a jury.”

The segment via Thom Hartmann below: