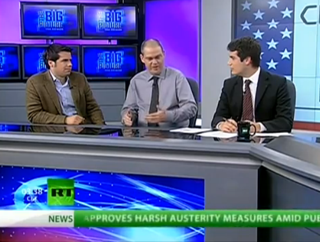 Hartmann began with the debt talks, opening the floor to debate over how the President was handling the Republicans. The Weekly Standard‘s Daniel Halper had a bit of a dismal approach to it, noting that “the more I think about it, the more I think there’s not going to be a deal.” The Daily Caller‘s Jamie Weinstein added that he supported the efforts of Rep. Paul Ryan, suggesting Congress “follow the courage.” Christopher, on the other hand, found that it was President Obama who was coming out looking the best during the talks, arguing he “played it like a poker hand” and the reports of him “calling a bluff” were incorrect– “he’s not making a bluff, he’s check raising the Republican bluff.”

From the debt debate, Hartmann switched gears to the News International corruption scandal. “Is the writing on the wall?” he asked, adding jokingly, “can we at least have them take the word ‘news’ out of ‘Fox News?'” This sparked a heated debate, as Halper argued that the phone tapping scandal was not worse than the New York Times publishing the Wikileaks war files. “You’re saying it’s cool to publish the intimate story of 9/11 victims, of murdered children, but it’s not a good thing to publish the secrets of a government that has committed crimes?” Hartmann asked. Christopher also asked incredulously how the New York Times had broken the law, with Halpern’s argument being that the long-term detrimental effects of the Wikileaks files were much greater than the wiretapping. As for Fox News, Christopher added that, in practical terms, given the internal divisions between news and opinion at Fox, “Fox News viewers are going to be able to draw the line between what happened in England and Fox News,” as both are similar disciplines.

The full panel debate via RT America below: