Megyn Kelly Blows Up Over Dem Rep’s Grilling Of Tea Party Leader: ‘How Dare He Put The Burden On Her?’ 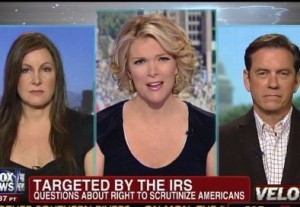 If you thought Rep. Paul Ryan‘s take down of Democratic colleague Rep. Jim McDermott‘s “political theater” comments at today’s House hearing on the IRS targeting conservatives was harsh, wait until you see Megyn Kelly‘s reaction. The Fox host convened a bipartisan panel to discuss the most heated moment of the hearing this afternoon, but saved the most outraged comments for herself.

Radio host Chris Plante also had some tough words for Congressman McDermott, who he said was “unencumbered by any quaint, old-fashioned notions of decency, honesty and integrity.” In Plante’s eyes, McDermott “decided to attack the people who were targeted for their political beliefs by the vicious arm of the federal government: the IRS.” He added, “The congressman’s dishonesty was outdone only by his shamelessness, his lack of integrity, and the vulgaritty of the defenses that were seeing launched these days are really beyond anything I have seen in 25 years of watching Washington closely.”

Liberal Fox contributor Leslie Marshall pushed back, defending McDermott’s “frustration” and pointing to instances when liberal groups were targeted during the Bush administration. She added, that “any group, left or right, that is applying for this tax exempt status, as Americans and as a tax payer, I want them, left and right, to be scrutinized.”

But Kelly got more heated as she delved further into the way McDermott questioned one of the tea party leaders testifying today about what questions should thought the IRS should be able to ask her. “Why is that the obligation of the woman from Iowa?” Kelly asked incredulously. “They so screw it up at the IRS in Cincinnati and Washington, that now the lady from Iowa has to come in before the House Ways and Means Committee and say ‘this is the way it needs to be done’? How dare he put the burden on her?”