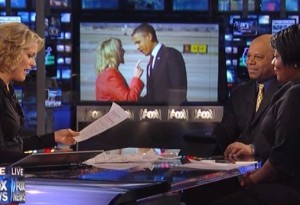 You know a segment is growing beyond the control of its host whenever anyone invokes the term “____ mafia.” In the case of Monday’s episode of America Live, host Megyn Kelly tried, in vain, to reign in the discussion by guests Jehmu Greene, former president of the Women’s Media Center, and radio host / Tea Party 365 co-founder David Webb.

Kelly opened the segment by playing back radio host Joe Madison‘s recent comments to MSNBC’s Al Sharpton about the widely-circulated photo of Governor Jan Brewer wagging her finger in President Barack Obama‘s face. There are simply some people, Madison had said, “who cannot stand the fact that this is an African-American who is now one of the most powerful individuals on the planet.” Which is to say: Brewer’s decision was motivated by racism aimed at the President.

Greene started things off by making it clear that, as she sees it, Brewer is not a racist person. “But the reality is,” she continued, “we live in a country, we live in a world where there is, you know, bias that we have that is subconscious.” Greene also wondered whether Brewer would have, as she put it, “felt threatened” had the President been white. Perhaps, she ventured, that reaction is result of subconsciously racist behavior.

Webb noted that women (of any race) can often feel threatened by men (regardless of race). Greene wasn’t buying it. “By the President?” she asked. “In front of cameras, in front of an entire audience, in front of the press corps?”

Webb moved on to Sharpton, Madison and Jesse Jackson’s analysis of the confrontation. “Did Jan Brewer’s finger,” he asked, “have the N-word written on it? Maybe that would’ve made it racist. Or is this a case where the President and his acolytes need to call out the ‘Black Mafia’ — which is what they are — to turn it into racism?”

Kelly then brought up the fact the White House is suing the state of Arizona, and that Obama had essentially “started” the argument by bringing up Brewer’s negative depiction of him in her book. Greene praised Brewer for her ambition and mettle, but opined that the Governor had nonetheless “wanted a confrontation on immigration” because it’s good for her, politically, to show aggression against the President:

And that is where I do point fault at her. Because she may not be be a racist, but she also understands, by her taking that stance, she is tapping into some of those racial undertones that we have in this country. And for David to deny that they exist is ludicrous.

Webb, meanwhile, thinks the “Black Mafia” would do well to focus their efforts and energies elsewhere — like, say, on accusations of racial discrimination within the Occupy movement. Greene had just about enough at that point, calling out Webb for his repeated use of the term “Black Mafia,” which, as she sees it, serves to criminalize members of the black community for their opinions. It is disrespectful, offensive and uncalled for, she added.

Remember, Webb added later, that Obama is biracial. “He’s half white,” he said. “Which side do they hate?”