Michael Moore: ‘Glenn Beck & Bill O’Reilly Have Called For Violence Against Me’ 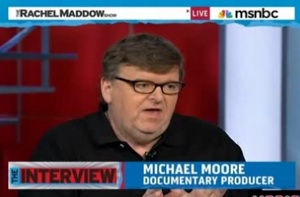 Michael Moore appeared on The Rachel Maddow Show tonight and the topic was the appropriate amount of hyperbole in a heated political climate, particularly in the context of the Lauren Valle incident (the Ron Paul protester whose head was stomped upon.) While discussing the rancorous tenor of the current political discourse, Moore alleged that both Glenn Beck and Bill O’Reilly had effectively called for violence against him.

Hang on, let me just tell you what I’m thinking. I’m thinking about killing Michael Moore, and I’m wondering if I could kill him myself, or if I would need to hire somebody to do it. No, I think I could. I think he could be looking me in the eye, you know, and I could just be choking the life out — is this wrong? I stopped wearing my What Would Jesus — band — Do, and I’ve lost all sense of right and wrong now. I used to be able to say, “Yeah, I’d kill Michael Moore,” and then I’d see the little band: What Would Jesus Do? And then I’d realize, “Oh, you wouldn’t kill Michael Moore. Or at least you wouldn’t choke him to death.” And you know, well, I’m not sure.

As Mr. Moore says in the following clip, O’Reilly’s comments were somewhat less egregious when he told a guest that he “was against the death penalty, but not for Michael Moore.” Both of these comments are not current, having occurred over five years ago, though it’s clear (and understandable) that they left a mark.

One could easily argue that these are examples of over-the-top hyperbole, but as Michael Moore states quite clearly, now is a time to be very careful, if not responsible, with one’s political rhetoric.