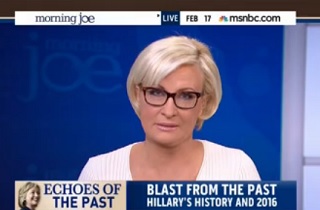 The political media, to varying degrees, have been humoring Sen. Rand Paul‘s (R-KY) attempts to attack former Secretary of State Hillary Clinton over former President Bill Clinton‘s mid-90s sex scandal with intern Monica Lewinsky. On Monday morning’s Morning Joe, however, co-host Mika Brzezinski blasted Republicans who are bringing this up as “sexist, misogynist hypocrites,” and literally begged Rand Paul to keep it up because “it will backfire so badly, and you guys will be in the same exact place where you are right now.”

Since Rand Paul began attacking Hillary Clinton over the Lewinsky scandal a few weeks ago, the political press has tried to have it as many ways as possible, expressing doubts about the strategy, while not exactly quashing it. Joe Scarborough, for example, thought it was just a terrible thing to even bring up, yet wondered if it was fair game, while network-mate Chris Matthews has been simultaneously damning the attacks and egging them on as an effective way to reach the Republican base. The ostensible objective CNN has taken the “some say” approach, but it feels a little bit like asking should Grand Moff Tarkin destroy Alderaan? Sure, it’s a peaceful planet, but also a crucial plot point, and everyone knows you don’t get to be Grand Moff by ignoring the base.

On Monday morning’s Morning Joe, Mika Brzezinski said out loud what everyone already knows, but doesn’t want to ruin the movie by revealing it: Republicans who insist on pressing this attack will be sitting womp rats. After playing a clip of Mitt Romney playing the Lewinsky game, Mika said “Some Republicans have been bringing this up along the way, and doubling down on it. I just have one question for Mark Halperin. If Bill Clinton could run for president again, would he win?”

“Any Republican who is dredging this up is a misogynistic sexist hypocrite,” Mika added, “because if Bill Clinton can win again with all of these problems, and Hillary Clinton, they can bring down because of this, and they think they can each go after it, they are clueless, and they are complete sexists because it’s not even her affair.”