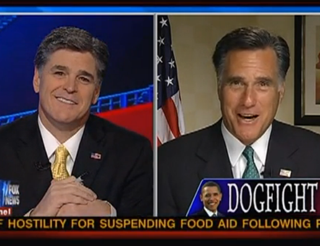 Mitt Romney and President Barack Obama woke up to a bizarre sharp turn in the election news cycle: suddenly, conservatives were all aflutter about a confession in the President’s biography that his stepfather taught him to eat dog meat in Indonesia. Romney had already commented earlier today that he wasn’t interested in talking about that, but he was confronted once more by “Dog-gate” in an interview with Sean Hannity (who actually calls it “Dog-gate”). He laughed and adamantly refused to take the bait.

The interview began with several questions about the campaign trail and the economy, with Romney asserting repeatedly that “the President has failed” to turn the economy around or stop the national debt from continuing to swell. Hannity asked first about the story of Seamus Romney, the famous Irish setter who rode atop Romney’s car roof. “Do you think this was by design?” asked Hannity, to which Romney replied that, “of course,” but that the election would be won “based on jobs, not dogs.” Romney joked that, this time around, “[President Obama] won’t be appearing in front of blue columns at the convention… he won’t want to remind people of Greece.”