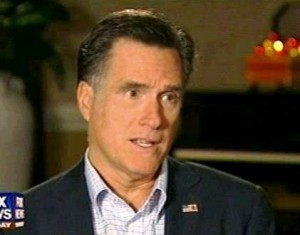 On Sunday morning’s Fox News Sunday, Republican presidential candidate Mitt Romney put on a veritable clinic on the dual pillars of his campaign: taking all sides of an issue, and taking no side of an issue. When host Chris Wallace asked him whether he would have invaded Iraq, given what we know now, Romney breakdanced around the question. He did reveal that it’s “fortunate” the troops are out of Iraq, but that President Obama was wrong to take the troops out of Iraq, but that, as president, Romney wouldn’t put troops back in Iraq.

This year’s Republican primary race has been marked by foreign policy positions that are a hotter mess than microwave barf, but at least Romney’s rivals have been consistent with the crazy. In his performance on FNS, the former Massachusetts Governor boldly went nowhere. Asked by Chris Wallace if, “looking back and hindsight is always 20/20,” the US should have invaded Iraq, Romney responded with a Saladworks-worthy response.

Gov. Romney began by helpfully restating the question. “Going back and trying to say given what we know now, what will we have done? Would we have invaded or not?” Romney said. “At the time, we didn’t have the knowledge that we have now.”

“At the time, Saddam Hussein was hiding. He was not letting the inspectors from the United Nations into the various places that they wanted to go. The IAEA was blocked from going into the palaces and so forth. And the intelligence in our nation and other nations was that this tyrant had weapons of mass destruction. And in the light of that — that belief, we took action which was appropriate at the time.”

In hindsight, then, Mitt Romney thinks the US should have…well, he doesn’t say, but in explaining the lessons learned, he doesn’t address the intelligence failures that led us to war. The logical conclusion is that a President Romney will not have benefited from that bit of historical wisdom, the same missing wisdom that has GOP sabers rattling at Iran.

Romney also parted ways with the conservative mythos surrounding that infamous “Mission Accomplished” photo-op, saying “I think there was a sense that when, on the ship it said Mission Accomplished, that the mission had been accomplished. Turns out it was just getting started and we had to pursue a surge very late in the process.”

But it was on the issue of the Iraq War’s end that Romney really dazzled. “Fortunately,” Romney said, “we’ve now been able to pull our troops out. We’re, of course, very happy to see our troops come out.”

He then turns right around and says “We should have left 10,000, 20,000, 30,000 personnel there to help transition to the Iraqis’ own military capabilities. I’m very concerned in this setting.”

So, Mitt Romney is very happy the war is over, but he wishes the war wasn’t over? It’s “fortunate,” but also a disaster? Well, at least President Romney would set things right. Right?

“As president, would you send u.s. troops back into Iraq?” Wallace asked.

“I think the decision to send US troops into a combat setting is a — is a very high threshold decision. This is not something you do easily. You don’t send our troops around the world every time there’s something that goes off an untoward way.”

After some attempted followup from Wallace, Romney clarified. “I’m not going to say where I would send troops or not send troops.”

Romney often seems to be looking past his primary challengers, and campaigning to the general electorate. Saying everything and nothing is a tried-and-true political modus operandi, but it’s usually a good idea to take a breath now and then.