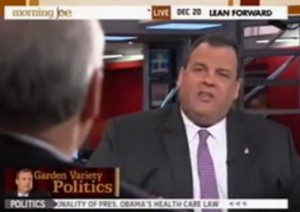 In an appearance on Tuesday’s Morning Joe, New Jersey Gov. and Mitt Romney-endorser Chris Christie joined host Joe Scarborough in the shared delusion that President Obama, at the beginning of his term, enjoyed a filibuster-proof majority for two years, and “frittered” it away. There’s a fair debate to be had as to whether the President took full advantage of that majority, but it is a fact that even the most generous calculation reveals that the Democrats’ obstruction-free window lasted 7 months, not two years.

This wasn’t the only big, fat steamer in the segment (Christie tried to sell the House GOP’s renege on the payroll tax deal as an example of Republicans not obstructing the President), but it was the biggest and steamiest. While this sort of thing is to be expected from a politician trying to get elected, I had come to expect better than this from Joe Scarborough, whose appeal as a commentator rests largely on his knowledge of the inner workings of congress.

It takes 60 votes to overcome a filibuster in the US Senate, which is now the default to get pretty much anything done. As Scarborough well knows, the Democrats didn’t reach that 60-seat threshold in the Senate until Sen. Al Franken (D-MN) was sworn in on July 7, 2009. They lost that majority upon the swearing-in of Sen. Scott Brown (R-MA) on Feb. 4, 2010, just under seven months later. While state politician Christie can possibly be forgiven such an error, someone with Joe Scarborough’s reach and influence ought to have better than a 71% margin of error.

As Mother Jones‘ Kevin Drum points out, though, the actual amount of time the Democrats held a filibuster-proof majority, when you factor in the late Sen. Ted Kennedy‘s illness and the winter recess, amounts to 14 weeks.

What non-Democrats often fail to realize is that a Democratic majority isn’t like other majorities. While Republicans can be relied on to lock arms and stay put no matter what kind of political pepper spray they get hit with, there are always about 10% of Democrats willing, nay, eager to undercut their own party. To the extent that Barack Obama ever had a filibuster-proof majority, he still had to water everything down just to get past his own party. They are the reason the President ended up with a too-small stimulus package that was 40% tax cuts, just like Mitt Romney wanted.

Even given those limitations, though, the President did manage to get a few minor things done, like saving the auto industry, reversing 750,000-per-month job losses, passing health care reform (I can’t wait for Republicans to try and explain to Americans how they’ll be better off when insurance companies can go back to throwing them off their health benefits again), rescuing the economy from a new Great Depression, and killing so many terrorists that even Republicans began to complain, just to name a few. There are people on all sides of the political spectrum who would argue he could have done more (or in the Republicans’ case, should have done less), but it’s just not accurate to say he “frittered away” that tiny window.

Gov. Christie has the excuse that he’s shilling for Mitt Romney, but Joe Scarborough knows better. Morning Joe has earned influence beyond Scarborough’s conservative ideology because even those who disagree with him have come to expect him to tell the truth. If he wants to retain that influence, Scarborough needs to live up to that expectation.