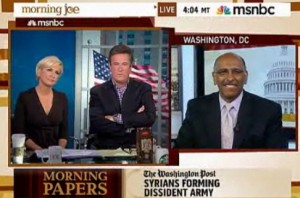 It was as bad a Monday morning for Rick Perry as it was a good one for Mitt Romney. Following Romney’s media-adjudged victory in Thursday night’s debate over a beleaguered Perry, then Perry’s cartoonishly lopsided thrashing by Herman Cain (Cain beat Perry so badly, Perry’s friends started calling him “Abel”) in the Florida straw poll, things were looking way up for Romney. The Morning Joe crew assessed the winners and losers of a turbulent week in Republican primary politics.

Host Joe Scarborough also noted the fall to oblivion of Michele Bachmann, who garnered just 1.5% of the straw poll vote. Former RNC chair Michael Steele chalked that up to the controversy over her remarks about the HPV vaccine, which Steele said “made us look like know-nothings.”

While Pery’s loss is definitely Mitt Romney’s gain, he’s still the GOP’s “safety school” nominee, which, as Scarborough points out, is arguably a better thing for social conservative Rick Santorum, who polled within a few napkin-lengths of Perry, and who could make some noise in Iowa. Hell, he even beat Ron Paul, the King of the Straw Polls.

The zingers abounded, as Scarborough alternately characterized Perry’s debate performance (referencing Brit Hume’s review) as “throw(ing) up on himself,” and as “speaking about as well as a white horse.”

The net effect of Perry’s immolation is that, with or without the Chris Christie factor, large conservative donors will hesitate.

Steele also made the observation that the misgivings that many politicos had over Perry entering the race so late have come to pass, which is an excellent point. How much better would Perry have performed if he’d had a few more debates under his belt already, a more refined message in place, and a better organization?

In other years, Perry’s woes might not seem so dire, but with the ever-increasing role of the media in shaping public opinion, and even the conservative media against him, Perry faces an uphill climb. Once that fork is stuck in you, it’s hell to get out.