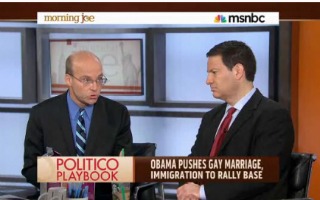 Is Mitt Romney‘s the party of “old, straight, white men” (Also known, joked Morning Joe host Willie Geist, as the party of panelist Mike Barnicle)? Politico’s Mike Allen appeared on the show to share his report about how the Obama re-election campaign is essentially “exploiting this weakness by Republicans.”

“There’s a study of exit polls,” he shared, “that found between ’76 and 2008, the proportion of minorities doubled from 12 to 26. And you can argue that, mathematically, Ronald Reagan couldn’t have been elected with the electorate that these guys are facing.” He described Obama’s outreach efforts as being a “campaign within the campaign,” with “barber and beauty shop” outreach within black communities, and dorm captains and “urban DJ programs” aimed at attracting younger voters.

Geist asked whether President Obama’s immigration policy announcement will be looked at as the move that proves pivotal in determining who is elected president this November. Allen responded that Republicans were definitely caught off-guard by the move, adding that that Cuban-American Senator Marco Rubio had been on “everybody’s” vice presidential list because of his possible appeal to Latino voters. Of course, he noted, ABC reported this morning that he has not been vetted by the Romney campaign. He also echoed Good Morning America‘s report on the matter, touting Tim Pawlenty as a likely VP pick because he is “outside Washington,” as is Rob Portman.

Geist then noted the importance of broadening the GOP’s demographic base, lest it become a “dead party.”

“When gay marriage became instrumental in so many states in 2004,” said panelist Catherine Crier, “remember, we’re going to make sure there’s an issue to bring out a conservative audience. There has been a long, concerted effort to roll out this vote, what I call a voter suppression vote.”

Take a look at the segment, courtesy of MSNBC: