Morning Joe Wonders Where Have All The Conservative Intellectuals Gone?
video

Morning Joe Wonders Where Have All The Conservative Intellectuals Gone? 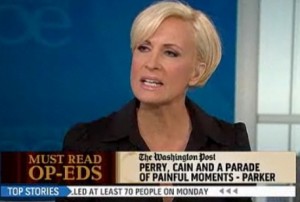 As tempting as it is to respond to that query with the obvious answer (they’re drinking Tranya somewhere with Sasquatch and Batboy), Begala has a point. Back in my day, Republicans were the boring ones, who could put you to sleep like human Allegra pills with policy mumbo-jumbo and philosophical gibberish. Now, as both Begala and Parker point out, the conservative ecosystem produces a bumper crop of dumbed-down candidates who wilt under the slightest intellectual glare.

Parker tied her critiques of Perry and Cain to the rise of Sarah Palin, aptly comparing the pair’s attempts at damage control to Palin’s famous winking. She sums up her column by saying, “A funny line is worth a laugh, a song may buy you lunch, but in the end, there’s no winking one’s way to the White House.”

The dumbing down of the Republican Party long predates Sarah Palin (some would argue that she dumbed herself down to fit the vogue), though. While there were lesser milestones to the endumbening of politics in general (the Nixon-Kennedy debate, the rise of Ronald Reagan), the 2000 election drew a bright line between conservatism and intellectualism. Abetted by the mainstream media, conservatives attacked Democrat Al Gore for being an “intellectual elite,” and asked voters to elect the guy they’d rather have a beer with.

Aside from being a conscious strategy, I think this phenomenon was the natural result of conservatism’s regressive trajectory. Conservatism used to be about providing a check on progress, about moving forward, but with extreme, often painful caution. Sometime during the 90s, though, even that slow progress achieved a critical mass that created a conservative panic, and made them go from a lower gear of progress into gunning it in reverse.

Even though Gore won that election, which was later awarded to George W. Bush, conservatives decided the strategy had worked, and continued the attack against John Kerry in 2004. By 2008, intellect had become a full-blown liability for then-Sen. Barack Obama, and while it’s easy to blame conservatives for this, none of this could ever have succeeded without the mainstream media’s enthusiastic participation.

The Morning Joe panel touched on some of this, but midway through the clip, made a decent observation while off on a tangent about Mika checking her tweets during the show. Mike Barnicle observed, “Ten years ago, you would think about a person — you’d think about an issue, you’d think about whatever it is you were thinking about. And now people tweet it. Instead of thinking.”

Without a doubt, the shrinking of the news cycle, along with the national attention span, has contributed greatly to the lowering of the common denominator, but just as it rewards politicians and media figures who cater to that microscopic attention span, so, too, does the audience reward that lack of substance. As part of a staff that works hard to provide smart reporting and commentary on politics and the media, it can be frustrating when all of that hard work is eclipsed, many times over, by a Nancy Grace nip slip. Maybe America is getting the anti-intellectual culture it deserves.