MSNBC Cuts Away From Pres. Obama Q&A After He Knocks Cable News 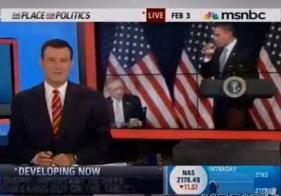 It was (sort of) Presidential Question Time, Part Two today, as Pres. Barack Obama addressed the Democratic Senators at their retreat.

It turned out to be far less of a pull-back-the-curtain moment – but it was interesting to see MSNBC deal with what happened when the President started taking some shots at cable news.

If everybody here turned off your CNN, your Fox, just turn off the TV, MSNBC, blogs, and just go talk to folks out there, instead of being in this echo chamber where the topic is constantly politics. The topic is politics. It is much more difficult to get a conversation focused on how are we going to help people, than a conversation about ‘how is this going to help or hurt somebody politically?’ and that’s part of what the American people are just sick of.

Well one-minute-ten-seconds after MSNBC was mentioned by name, the cabler cut out of the Q&A. It was quite jarring, only made more obvious by the immediate reference that was made to it. David Shuster joked about it, saying the Pres. was “encouraging all the Senators to turn us off, don’t pay attention to the echo chamber. But we’re going to use our authority to be able to essentially turn off the President’s feed right now.”

And they did – moving on to pundits, discussing the political implications, almost on cue.

It should be noted that at the time, MSNBC and CNN were covering it live while Fox News was not. FNC took even less of the address and subsequent Q&A than they did on Friday. MSNBC, meanwhile, was back with the coverage about 10 minutes later. As a whole, the event turned out to be more of a chance for Democrats in contested races to speak on a big platform with the President – and less of a real give-and-take than Friday.