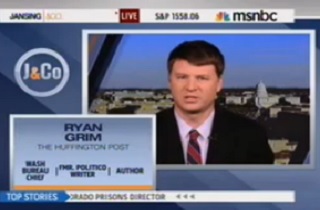 As the Supreme Court begins two days of arguments in landmark marriage equality cases, the topic of gay marriage is lighting up the cable news landscape like an exploding rainbow. On Tuesday’s Jansing & Co., Huffington Post reporter Ryan Grim darkened the skies considerably by telling host Chris Jansing that credit for the sea change on marriage equality ought to go (albeit ironically) to former George W. Bush adviser and Deputy Chief of Staff Karl Rove.

Citing, among other things, a new poll that shows historically high 58% support for legalizing gay marriage, Jansing asked Grim “Why is this all happening now? Why the sea change?”

“I think, actually, Karl Rove ironically deserves a lot of the credit for it,” Grim responded, addig that “In 2004, the Republican Party put a bunch of anti-gay marriage issues on different state ballots to drive out evangelical voters.”

Grim explained that this “took an issue that had not necessarily been partisan before, and turned it into a deeply partisan one. That meant that Democrats now had to decide whether they were against gay marriage, for gay marriage, for civil unions, against civil unions. As soon as you make the Democratic Party decide on a civil rights issue, they will shift eventually — it’s going to take some time, but they will eventually get there.”

“What you saw is rapidly, over the next several years, the Democratic Party moved in favor of gay marriage,” Grim heterosplained. “Once gay marriage then became legalized in different states, people went to weddings, people bought gifts, people’s relatives and friends started getting married, and they saw that the institution of marriage wasn’t any better or worse than it was before this happened. The sky didn’t fall, and now you’re seeing the polls surge as a result.”

While Grim was clearly giving a deliberately counter-intuitive response, it’s more than a little bit offensive to credit one of the scummiest political actors in the struggle for equality (even ironically), while ignoring the courage, activism, and sacrifices of people who actually supported and fought for equality. Very offensive. The bigotry that marriage inequality represents is a deadly one, and throughout history, people have risked, and given, their lives fighting it.

Still, this is a political show, so you might be able to forgive that somewhat if Grim’s argument were actually true. Well, the part about the 2004 elections is true, Republicans did wage an all-out campaign against gay rights, a successful one. But that’s where it ends, because the issue of marriage equality was already a partisan one, and the Democratic Party had already chosen a side.

Their 2004 nominee for president was then-Senator John Kerry (D-MA), who had voted against the Defense of Marriage Act, and who supported civil unions and equality for gay people. He even debated the issue with George W. Bush. In 2004, support for civil unions was the split-the-baby position that allowed a politician to fight for equality, without alienating a voting public that wasn’t quite ready for more. That was still the case in 2008, but momentum for gay marriage had begun to build in the states. Keep in mind that, in the early days of the Obama administration, the Republican Party was still pushing hard against even civil unions.

What good did Rove and co. do for the cause of marriage equality with their 2004 campaign against it? Well, it pushed opposition to gay marriage to an all-time high of 68% in 2005. Before the 2004 election, 48% of Americans favored a constitutional amendment banning gay marriage. In 2005, that number grew to 57%, another all-time high for that poll. Grim’s theory is that the backlash forced Democrats to take a stand that they had already taken, but doesn’t figure in the progress which might have been made had that backlash never occurred.

The people who are slowly giving up their bigotry certainly deserve to be welcomed by those who fought for years against it, but they don’t deserve an ounce of credit.