MSNBC Guest to Bill Kristol: America Thinks Your Plan to Go Back into Iraq Is ‘Nuts’ 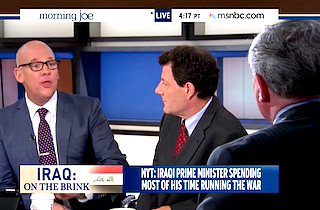 To the surprise of pretty much no one, neoconservative Weekly Standard editor Bill Kristol recommended on Morning Joe Tuesday morning that the U.S. send in air power and special forces to bolster moderate political forces in Iraq in the wake of renewed insurgent violence, to which Bloomberg Politics editor John Heilemann said: you’re bananas.

“This logic of yours — which, as you pointed out jokingly before, is consistent as you’re thinking about foreign policy and intervention — at this moment in the American polity, it seems to me there is no, zero, none, less than zero appetite for the kind of thing you’re talking about,” Heilemann said. “How would you get over the fact that the country en masse, Democrat and Republican, would tell you you’re nuts to think that we should be sending residual forces back into Iraq to get back involved in this war?”

RELATED: The Independents Explodes When John Bolton Accuses Hosts of ‘Defending a Dictatorship’

“I don’t believe that,” Kristol replied. “If the president had gone to Syria in 2011, do you think he would have had that support? If the President of the United States goes on TV and says, ‘This is a strategic crisis for the reasons I’m going to lay out here; we have to do something no one wants to do, which is to go back in with air power and special forces and maybe a few conventional troops to help stabilize the situation; we cannot allow an al Qaeda-backed group to dominate one part of the Middle East and Iranian-backed groups to dominate another part of the Middle East; it’s an unacceptable threat to us.’ He would have support.”