MSNBC Panel Grills Schumer on ‘Extortion’ Charge: What About All The Democratic Shutdowns? 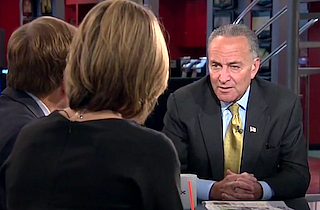 Senator Chuck Schumer (D-NY) appeared on Morning Joe Monday morning to argue against the continuing resolution calling for the delay of ObamaCare, and answered accusations that Democrats had engaged in similar brinksmanship tactics in the past.

“[Republicans] are not saying ‘Let’s meet in the middle,'” Schumer said. “I heard Matt Salmon say they’re compromising because they are not for eliminating, but delaying [ObamaCare] for a year. That’s like: ‘Oh, we’re compromising, instead of chopping off both your arms, we’ll chop off only one arm, aren’t we great?’ It’s the holding the good of the country, the economy, middle class people, at risk, and saying you’re good guys, you won’t do that, unless we get our way. That’s different than anything that’s happened before. There have been debates, but nobody—

“No,” Steve Rattner objected. “We have had something like seventeen shutdowns over the last thirty years, many precipitated by the Democrats with their own set of demands. Why is that different than in this case, the Republicans using this to try to get something done they want to have happen?”

“Because the fight there was on government funding,” Schumer said.

“Not always,” Rattner said. “It was on abortion, the fairness doctrine, nuclear aircraft carriers, all this stuff.”

“You look at the market and you look at people’s concerns and you look at the consequences of what they are doing here,” Schumer said. “It is far different than a dispute that couldn’t be resolved over a small issue not related to the economy. It’s hugely different. I heard Joe [Scarborough] say the other day, well, Obama voted against the debt ceiling. Yeah, he did, but he didn’t say unless I get my way on everything, or on the most major issue that’s faced, I’m going to shut the government down, or not going to renew the full faith in credit. The kind of extortion we’re seeing now is totally different than the past. Totally.”