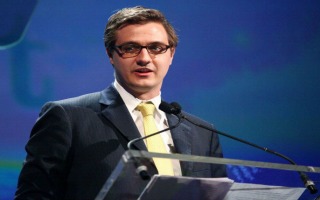 In a recent interview with Talking Points Memo, host of MSNBC’s weekend program Up, Chris Hayes, was asked if he thinks there is any symmetry between his cable news network and that of their closest competitor, Fox News Channel. Not only did Hayes reply that he did not think a comparison was appropriate, he slammed Fox News’ Roger Ailes as a political operative and implied that his network had someone with a more seasoned background in television programming and production at the helm. But it is an odd comment for Hayes to make, given that Ailes’ storied television career predates Hayes’ birth.

RELATED: MSNBC’s Chris Hayes: ‘Impossibility Of Any Symmetry Between Fox [News] And MSNBC’

When asked if he thought there was an equivalency that could be applied to the editorial visions of his network, MSNBC, and that of Fox, Hayes rejected that notion. He said that MSNBC is run by “someone who worked in TV” while Fox News is run by “A lifetime, hard-right, conservative ideologue Republican partisan.”

Really? Ailes has served as a Republican political consultant – working with such high profile figures as Presidents Richard M. Nixon and George H. W. Bush. That kind of high-profile political consulting invites scorn from only partisan political operatives or those who do not know and could not be bothered to care about what is required of a consultant to secure such powerful clients.

But Ailes career is only punctuated by years of political consultancy. The vast majority of his career has been spent working in television.

Ailes began his career producing entertainment and talk programming on television in the early 1960s. He produced, and later executive produced, The Mike Douglas Show – a variety-talk program which ran for 30 years. He was nominated for a daytime Emmy for his work.

In the 1970s and 1980s, amid jobs consulting for GOP politicians and presidents, Ailes produced a number of television specials before he went back to work in television full time in the 1990s – for NBC.

Ailes became president of CNBC in 1993 and even hosted an hour-long talk program on NBC’s short-lived cable news network “America’s Talking” in 1994.

In 1996, when Microsoft and NBC News announced a partnership to start a 24-hour cable news network, Ailes left NBC to start his own cable news outlet – he took over 80 NBC employees with him for that endeavor.

Chris L. Hayes was born in 1979. Phil Griffin, president of MSNBC and described by Hayes as his network’s television aficionado, started his television career with NBC’s Today Show in 1983 as a sports producer.

A little perspective would inform Hayes’ inflated sense of self-worth, particularly when he attempts to demean the notable careers of others.