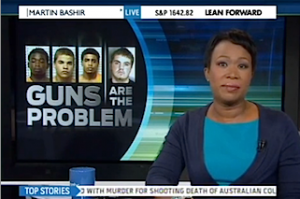 Filling in for Martin Bashir Wednesday, MSNBC’s Joy Reid attempted to figure out why of the 11,000 shooting deaths that occur in this country, do only a handful of them “capture the media’s–and thus the public’s–attention.” After Newtown, Aurora and Trayvon Martin, Reid sees the media paying extra attention to the apparently random shooting of Australian Chris Lane by three “bored” Oklahoma teenagers and the narrowly avoided catastrophe at a Georgia elementary school.

Reid argued that it’s not “race, poverty, gangs, or even video games and movies” that tie these shooting together. It’s access to guns. “These are obviously two very different stories on many levels,” she said. “The location is different, the race of the suspects is different, the types of guns used. But can we get away from the fact that the common denominator are young people with access to guns?”

The Chicago Tribune’s Clarence Page tackled this question first, saying it’s only gotten easier in recent years for young people of all races to get their hands on guns. “Obviously the insanity involved in these two cases shows that background checks and tougher access are what we need,” he said.

Shooting victim and Salon writer Brian Beutler agreed, explaining why he prefers stricter gun laws to police tactics like stop-and-frisk that he said unfairly targets innocent people. “It would be nice to at least not regard these shootings primarily at least by the race of the gunman,” he said, “because then you get into the situation where some people are trying to tally up, you know, the number of shootings perpetrated by black youth versus white youth. That just doesn’t feel like a very healthy way for society to be pitting individuals against each other.”

Reid said she’s already starting to see that rhetoric from the right, specifically about the shooting of Chris Lane. you’ve started to see people on the right tally it up on the basis of race. As an example, she singled out the tweet below from former congressman Allen West, along with Fox News’ mischaracterization of the shooters’ races.

Seeing the right “directly trying to bait the president on race, a situation with the baseball player that’s already so tragic,” Reid asked, “Why do they seem so determined to also make it racial?”

“They’ve been champing at the bit waiting for a case that would help them to prove the point that white people are not–that their lives aren’t as valued as much as black people’s lives are–the exact opposite of what experience tells us,” Page said. He noted that the media attention to the Trayvon Martin case stemmed from his parents and others being outraged that the state did not initially charge Zimmerman with a crime. “What we’re looking for here is equal justice,” he said. “If the white Australian who was killed was not getting equal justice in this case, I would be protesting as much as anybody ought to be.”

While he did think that “conservatives have been on Fox News and on drudge looking for incidents of black use behaving badly,” Beutler argued that if you really want to reduce the number of shooting in this country, “there are better ways to go about it than trying to stereotype what you think shooters look like.”