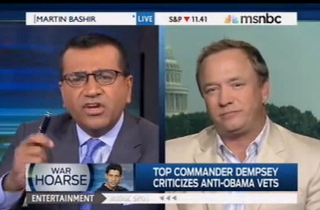 Thursday afternoon on Martin Bashir‘s MSNBC show, a disagreement over the implications of a current Army general denouncing military members who engage in partisan politics got heated quickly. The result was Bashir shouting down his opposing guest and cutting the segment short.

Earlier in the segment, GOP strategist Trey Hardin had said that military leaders are critical of the president, which prompted Bashir to bring up the recent Fox News quote in which General Martin Dempsey, Chairman of the Joint Chiefs of Staff, expresses disappointment in the anti-Obama campaign launched by several ex-military members (groups which Bashir characterized as “Swift Boat” groups, in reference to the 2004 pro-Bush groups that attacked John Kerry‘s military record).

“If someone uses the uniform, whatever uniform, for partisan politics, I am disappointed because I think it does erode that bond of trust we have with the American people,” Gen. Dempsey told Fox.

“That’s the top U.S. military commander,” Bashir told Hardin. “So if these groups don’t pass muster with him, why should voters listen?”

“First of all,” Hardin responded, “he serves President Obama right now, so it’s not a surprising comment.”

Bashir did not take kindly to that remark: “I’m sorry, I cannot allow you to cast such a contemptuous aspersion against a senior military officer by demeaning his service to this country. Will you please take that comment back?”

“I did not demean his service at all,” Hardin said with a laugh.

“You did by suggesting that the only reason he said that was because he serves the president,” Bashir shouted back in response. Would you please take that comment back?”

“Let me answer,” Hardin insisted, but Bashir kept asking him to take back his original comment.

“Hey, i know that you respect democracy and people’s freedom of speech,” Hardin began to respond before being cut off by an increasingly irate Bashir: “Sir, he serves the United States of America.”

“These retired military have a right to vote and advocate,” Hardin got in before Bashir decided to cut him off once and for all.

“Okay, Trey, you’re not going to take the comment back,” Bashir snapped while Hardin laughed. “Thank you very much.”

And with that, Hardin and the other two guests disappeared off-screen.

Watch the kerfuffle below, via MSNBC: