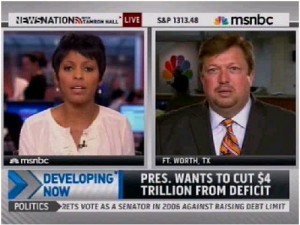 Hall, a fellow Texan, took exception to the jab, nonetheless. She told Dennis that it makes it difficult to take him seriously when he insults an entire state.

Dennis was undeterred. “You realize,” he responded, “we have a surplus down here, whereas they have a tremendous deficit up there.”

As a native Jersey boy, I appreciated Hall’s effort, but we can take care of ourselves. Of course, Texas has a surplus. Think of all the money they save on things like toothpaste, and shoes, and books.

I’m just kidding, of course. Seriously, they don’t save any of that money, they blow it all on Stetsons and Dee-Lux-ee Truck Nuts™.

No, really, that’s not nice. Texas is a great state. Last time I visited, I met this farmer whose cow had a really strange “moo.” I said, “Does your cow have some Texan in her?”

I’m just kidding, he was actually already banging the cow when I met him. It was awkward.

No, but actually, really seriously, Tamron really should have pointed out to Dennis that his state’s rosier budget picture might have something to do with the fact that they get $0.33 more on the dollar in federal money than New Jersey does, and that they owe that surplus to a “rainy day fund” that’s mainly fed with tax revenues on oil and gas production.