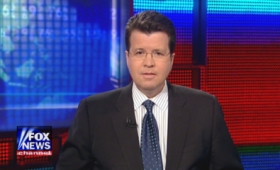 Neil Cavuto anchors the latest Fox News program to hit a major milestone – 100 months as the top program in its hour (4pmET).

As Your World holds the lead for 8+ years and counting, Mediaite talked to Cavuto yesterday about Fox News stability, the Obama administration’s policies and more.

Mediaite: You’ve reached 100 months as the top cable news show at 4pmET. What do you think has brought your program so much stability and success?

Cavuto: Clearly my sex appeal. If only that were true. I think we try to pound out the information in English, and do it clearly, when it comes to any and all business stories, out of D.C. or regarding people’s money. We never talk over people’s heads and never get lost in the wonkery. It’s hard to do these days because so much is thrown out there with acronyms and jargon. If you’re not careful you can retreat behind language. I always try to get the big picture right, the central theme of the show. It’s something I’ve done since I came to Fox, I can’t believe, 14 years ago. Sometimes we can make stuff more complicated than it needs to be.

“We don’t instantly come in with, ‘all corporations are evil, all priests are pedophiles, all people that want tax cuts are selfish, or all spending is bad.’ We aren’t red or blue, we’re green. We just follow people’s money and relentlessly so.”

Mediaite: Across the board over the last year, Fox News programs have been hitting the 100-month milestone. It’s a rare feat in cable news. What differentiates Fox News from other cable news outlets?

Cavuto: I think a lot has to do with passion. And looking at news in a given way, really bending over backwards to present in engaging many viewers. I know it sounds trite or cliché but what I have to do is really an uphill battle in that environment. I’m the guy in charge of the vegetables, if you think about it. I have two little guys, and the only way to make them eat their veggies is to bury them in pudding or something to make it appealing. It’s one thing I try to do. In business, or money matters, it’s an instant turn off to people. But I don’t think it’s case if you really try to step back and explain. I really think that’s the key for Fox’ success across the board. I don’t think it’s a right/left issue, a blue/red issues, it’s the basic, ‘can you just tell me what the issue is, and help me get a sense of all aspects of it, that I might not be hearing elsewhere.’ We don’t instantly come in with, ‘all corporations are evil, all priests are pedophiles, all people that want tax cuts are selfish, or all spending is bad.’ We aren’t red or blue, we’re green. We just follow people’s money and relentlessly so. Resident nerd here.

Cavuto: I think they are. I can remember covering the 1987 stock market crash, and I’m not minimizing it, it got around the clock coverage when I was at PBS at the time. And I was popping up on regular commercial stations too. But what was startling then was that a growing number of Americans had started participating in the stock market, but nothing like the percentage today. This bastion was really considered a corner for capitalists and is really now for everybody. We all have a stake in this game. Even people not directly invested, I like to point out there’s your pension, your 401K. We all have a stake in what’s going on.

>>>NEXT PAGE: A look at the cable competition, the Obama administration and Fox Business.