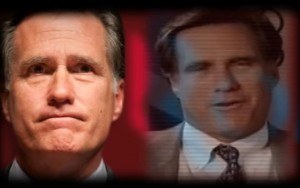 For a guy who has squealed like a stuck pig over Mitt Romney‘s attacks against him, former House Speaker Newt Gingrich has taken to the long knives like a Dexter set designer with OCD. Earlier this week, Gingrich managed to shoehorn the infamous pooch-on-the-roof road trip into an ad about debates (?!?), and now, his campaign (not his superPAC; there are no degrees of Kevin Bacon here) has put out an insulting spot comparing Romney to Massachusetts Democrats, and noting that he “speaks french.”

The Gingrich campaign has apparently stopped trying to hide its attacks. The “doggie” ad was at least ostensibly pegged to a real issue, albeit thinly (It was like all those times you tried to fit whatever you were interested in into an essay question; “And so, this awesome bong I made is an excellent example of hyperbole. In fact, that’s what I call it, The Hyper-bowl!”). This new spot eschews any pretense of substance, juxtaposing Romney with fellow Massachusans Mike Dukakis and John Kerry, and climaxing with a Kerry-Romney “French-off.”

When I say the spot is insulting, I’m referring to South Carolina voters, of whom Gingrich must think very little. It is possible, I’ll admit, that South Carolinians might not be the world’s biggest Francophiles, and the ability to speak French might be a minor liability to some, but the nakedness of the manipulation bespeaks a contemptuous condescension on Gingrich’s part.

Sure, there are some South Carolinians who will chuckle at Romney’s intonation of “Je m’appelle Mitt Romney,” but they also might wonder what that’s doing in a political ad. Does Newt Gingrich assume that New Hampshire voters are such rubes that they’ll flee Romney for his high-fallutin’ linguistic ways? Are South Carolina’s voters expected to drop their banjos, grab their Bowies, and chase Romney through the woods yelping “Wheeeeeee!?”

That’s not to say there isn’t an appealing kind of justice to this, given Romney’s own naked attempts to demonize Europe, but things like this and the dog thing are better left to people like me, not to candidates who say they want to draw legitimate contrasts with their rivals.

If there’s really any justice, the mainstream media will take this ad as a reminder of some of Gingrich’s other views on foreign languages: