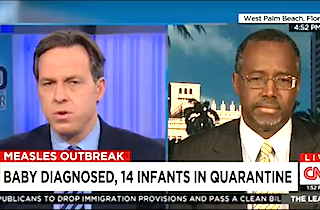 First, Dr. Ben Carson came out and said he believes vaccinating children is a matter of “public safety” and urged parents not to opt out. Then, he defended Sen. Rand Paul’s criticism of vaccinations. Now, during an interview with CNN’s Jake Tapper, Carson has linked the latest measles outbreak to “undocumented people” entering the United States.

“Isn’t exactly what we’re seeing in California right now, this measles outbreak, isn’t this because the people in California have been given the option of opting out and they have a whole bunch of misinformation and they’re not getting their kids immunized and now we have an infant who has the measles disease?” Tapper asked Carson. “Isn’t this a perfect example of what happens when you don’t mandate it?”

“So now we need to be doubly vigilant about making sure that we immunize our people to keep them from getting diseases that once were under control,” Carson added.

Rather than challenge that notion, which directly contradicted the premise he laid out in his question, Tapper opted to move on to other topics. The CNN anchor has, however, been aggressive on this topic, attempting to get Carson’s potential 2016 Republican primary opponents to clarify their respective stances on vaccinations:

Carson’s latest comments echod those of Rep. Mo Brooks (R-AL), who suggested that the measles outbreak may have been caused by “illegal alien children.”