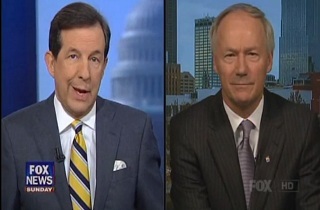 Asa Hutchinson, a former congressman and head of the NRA’s School Shield Task Force, reiterated the NRA’s priority of protecting schools by arming teachers or having responsible personnel on site. During Wallace’s peppering, Hutchinson appeared to stray from the NRA’s hardline on background checks while trying to focusing his answers to school safety saying that.

“You have to look at the language. I would look certainly at the gun shows and the sales that surround that in that environment. If we can make sure there’s a comprehensive check and we keep criminals from obtaining guns in that environment then those checks would seem appropriate,” Hutchinson said.

“I really believe that our focus should be on school safety, that is an objective that we can accomplish. It’s not that difficult to increase safety and it’s not even the most substantial cost measures that a local a school had to do,” said Asa Hutchinson, a former congressman and head of the NRA’s School Shield Task Force.

Wallace said that the just protecting schools from violence and armed attacks ignored the dangers facing people at other public places. He insisted that focusing solely on protecting places of education left young people traveling to school on a school bus vulnerable to possible attacks.

Hutchinson said the president’s efforts to curb gun violence are failing because it’s “divisive to America.”

“The wonderful Newtown parents that have gone through such an incredible tragedy, they have not even reached unity among themselves on what needs to be done because America is divided on that point,” said Hutchinson.