O’Reilly And Panel Savage Obama Over Skeet Shooting Photo: Looks Like A ‘Brochure For Welcome To Chicago’ 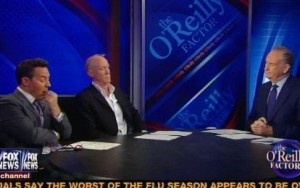 Bill O’Reilly tonight revisited the photo released by the White House of President Obama skeet-shooting. O’Reilly brought on Greg Gutfeld and Bernard McGuirk to weigh in on the controversy surrounding the photo, from whether or not it was actually Photoshopped or how the president looks in the photo. O’Reilly joked that it looks like a “brochure for ‘Welcome to Chicago.'”

Gutfeld found Obama to be “so nerdy” in the photo, suspecting that no woman saw the president’s attire before they took the photo because “if his jeans got any higher, his button fly would have jammed the rifle.” He said this was a “sacrilege when you’re shooting.”

McGuirk joked that it was surprising they make ear mufflers big enough for Obama’s big ears, before admitting he’s not in the same camp as the conspiracists doubting the photo’s realism. He said he doesn’t doubt the authenticity of the photo, but just found it stupid that the whole skeet shooting thing was used to show how much Obama doesn’t hate guns.

O’Reilly observed that when he first saw the photo, he thought it was a “brochure for ‘Welcome to Chicago.'” After O’Reilly said that Obama’s shooting at skeet rather than skeet, Gutfeld suggested “skeet” may just be code for “Fox News viewer.” McGuirk compared the photo to if Chris Christie released a photo of himself on a treadmill.