Fox’s Gretchen Carlson: Man May Have Filed Suit Against Jay Leno To Get Attention For Sikhism 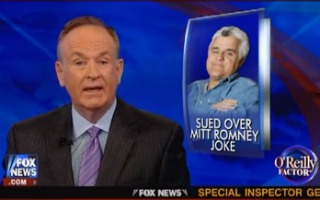 On last night’s The Factor, host Bill O’Reilly looked into the lawsuit filed against Jay Leno by a Sikh in California for a joke Leno had made about Mitt Romney. Leno’s segment poked fun at Romney’s wealth and multiple homes by showing a picture of the very ornate Golden Temple of Amritsar, a sacred site and the holiest shrine in Sikhism, as if it were the candidate’s lake house.

Does this “dopey” lawsuit indicate people in America are taking their respective religions too seriously? Panelist Margaret Hoover thought so, while noting that not everyone is like O’Reilly, who wasn’t the least bit of offended by, say, a sketch depicting actress Pamela Anderson as the Virgin Mary. But you get a lot of frivolous lawsuits out in California, she added. It’s to be expected!

Defender of Christianity Gretchen Carlson ventured that the lawsuit may have been filed to give Sikhism some attention, an argument O’Reilly wasn’t buying. If anyone should be suing, she later joked, it should be Romney because that wasn’t his real house. She also mentioned that, whenever Fox & Friends has mentioned Sikhism in a segment, the show has gotten a large response from the religion’s followers. “It is very akin,” said O’Reilly, “note that word, akin — to the Muslims. […] This is their whole life; they don’t want you running them down on any level.” It’s important to note that, while Sikhs are also monotheistic (God is “V?higur?”), their faith has no ties to nor is it an offshoot of Islam.

O’Reilly and Gretchen did agree, however, that Leno’s joke was funny. “People have got to have a little sense of humor,” said O’Reilly. Just look who’s the number one cable person in the country, he added. If that’s not proof of God’s sense of humor, then what is?