O’Reilly Pans Hillary Clinton’s Benghazi Testimony: If Any Politician Should Be Advertising Teflon, It’s Her
video

O’Reilly Pans Hillary Clinton’s Benghazi Testimony: If Any Politician Should Be Advertising Teflon, It’s Her 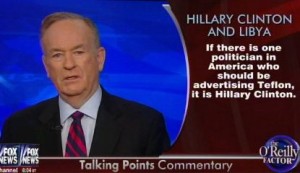 Bill O’Reilly was not happy with how little Hillary Clinton provided to the respective House and Senate committees during her testimony on last September’s attack in Benghazi, Libya. O’Reilly said the fact that Clinton remains popular in spite of the controversy shows that she is one of the rare politicians in Washington capable of deflecting criticism, commenting that she would be an ideal spokesperson for Teflon.

O’Reilly said that overall, the questioning was soft, but pointed to some “intense moments” between Clinton and Republican members of Congress. In response to Clinton asking “what difference… does it make” why four Americans died in Benghazi, O’Reilly shot back, “it makes a huge difference!” He pointed out how late ambassador Christopher Stevens had requested the State Department for more security.

O’Reilly also found it striking that “not one Democrat asked Mrs. Clinton a tough question,” saying such softball conduct on their part was “appalling.” However, in spite of the controversy, the majority of the country gives Clinton high marks for her post as secretary of state. O’Reilly framed this as Americans not holding Clinton accountable.

O’Reilly predicted that Clinton would be a “formidable” candidate in 2016 if she runs, pointing to how frequently she “dodged bullets” during her husband’s presidency. He said that if any politician should be advertising Teflon, it should be Clinton.