O’Reilly: Super Bowl With Obama Will Be ‘Most-Watched Interview Of All Time’ 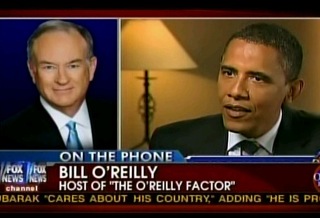 As heated as both national and international politics may be at the moment, Wikileaks and the Egyptian revolts will have some serious competition for attention from the Super Bowl tomorrow. Americans are gathering their tailgate fare and getting their jerseys ready, but if there is some sort of football game going on this Sunday, Bill O’Reilly seems to have not gotten the memo– he’s far more interested in what he believes will be the “most-watched interview of all time” preceding the game– an interview which, coincidentally, he is giving.

O’Reilly phoned into the Factor to chat with fill-in host Laura Ingraham about his interview prep (“push-ups?” she asked, tongue firmly planted in cheek). Beside taking a couple of days off to research and “taking it all in right now,” O’Reilly admits that he will likely not be entirely sure what the structure of the interview will be until he gets there. Of utmost concern, he noted, was that, in his previous experience, “often I had to interrupt him,” something “easy to do… to a senator, but it’s not that easy to do to the President.” Nonetheless, given his previously rapport with President Obama, O’Reilly hopes that it will be “more of a conversation than an interview” full of “provocative” but “very simple” questions.

Ingraham then asked O’Reilly about his ratings expectations, jokingly asking whether this will be “the most watched interview in the history of mankind in the entire world.” “There’s no question it will be,” O’Reilly replied without skipping a beat– though he didn’t take the credit. “That’s not because of me or Obama,” he noted, “it’s because of the internet.” The interview

The interview, which will air before the Super Bowl at 4:45pm EST on the Fox Broadcast Network, is scheduled to be short and sweet (as O’Reilly put it, the “quickest 15 minutes you’ve ever seen”).

O’Reilly’s preview on the Factor via Fox News below: