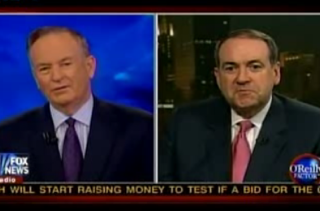 With a successful Palin-free February (well, close enough) behind us, Mike Huckabee is sure giving the conservative lightning rod a run for her money. In the past few weeks, Huckabee has told Chris Matthews to get back on “his meds,” claimed all Muslims want to “obliterate” Christians, and, most recently, said President Obama grew up in Kenya. He apologized for this last one to Bill O’Reilly tonight, who corrected him by noting that the President’s “crazy mom” took him to Indonesia, not Kenya.

“Honestly, it was the fortieth media interview of the day,” Huckabee confessed to O’Reilly of the day he claimed the President grew up in Kenya. Describing it as a “verbal gaffe,” he cited his a chapter of his own book that defied his statements, and apologized. He added that he doesn’t “have any doubts about his American birth,” but, with O’Reilly’s support, stuck to his point that colonial and post-colonial events in Africa shape the President’s view of foreign policy. O’Reilly even added in his correction that the President’s mother was, at best, “a little eccentric,” from which the geographically colorful upbringing springs. “We’re not giving you jazz,” O’Reilly noted of his gaffe, for which Huckabee appeared grateful– he’s gotten quite a bit of “jazz” lately for his statements. Not only did O’Reilly impose a no-jazz policy on the interview, he actively encouraged Huckabee to “say something crazy.”

Huckabee wisely did not quite oblige, though he did joke about refusing to answer the phone nowadays if he say “Fox News” on his caller ID, given his potential status as a 2012 presidential candidate and the recent purge of possible candidates at the network. O’Reilly, who, as of now, is not running for president in 2012, still had some sympathy for screening calls from up top: “I know they’re just going to be bitching.”